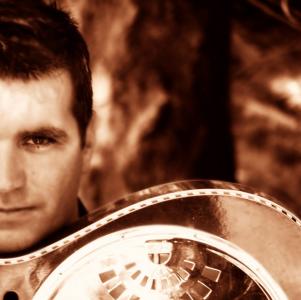 With a Juno nomination, a Western Canadian Music Award, two WCMA nominations and two Canadian Folk Music Award nominations to his credit, Joel Fafard has proven that he can take a niche genre like instrumental guitar music and make a significant name for himself at it. So why not take a step in yet another somewhat niche direction? Like, say, vocal covers of old Southern roots and blues songs? After taking a couple of months off at the end of last year - a creative breather he tries to make room for once a year - Fafard found himself drawn to his dobro and to his collection of Southern gems, and he decided it was time to commit them to record. In the process, he says, he found his voice as a singer like never before. Though Fafard sounds like a natural blues vocalist, with a voice that is sure to seduce fans of Kelly Joe Phelps and Harry Manx, he has always been an instrumentalist first and foremost.

He picked up the guitar at 15, took a few lessons from celebrated prairie musician Jack Semple, then went on to study for two years at the well-respected Capilano University music program in North Vancouver. He launched his professional career in the mid-90s as a member of Scruj MacDuhk, the predecessor of the Juno-winning Grammy-nominated Duhks. Later, he established himself as a solo singer-songwriter, releasing three albums, touring coffee houses and earning praise for the maturity of his songwriting. However, Fafard was never happy in the singer-songwriter role, and decided to take a chance on the career path he really wanted but never dreamed would pay: being an instrumental guitarist. As it happens, it did pay. Fafard's sophomore instrumental album, ...and another thing..., earned a Western Canadian Music Award for Outstanding Instrumental Album and was nominated for both a Juno and a Canadian Folk Music Award. Its follow-up, Three Hens Escape Oblivion, received a second CFMA nod and was a runner up for an International Acoustic Music Award. Meanwhile, Fafard's music was featured in the TV shows Alice I Think and Road Trip Nation, and he co-scored the Middle of Somewhere TV series with Jason Plumb. In 2008, he was commissioned by The Globe Theatre in Regina to write a one-man show of tunes with tales.

Cluck Old Hen is the first vocal album from Joel Fafard in this decade. The previous three have been solidly instrumentalstunningly good instrumentalwith a richness of original tunes and traditional material re-imagined. But like many performers, what's on his CD isn't necessarily all that happens in the concerts; and Joel Fafard was singing these songs live and – his words: "Everybody was asking which albums they were on and I got tired of saying 'none of them'." So here's a somewhat different program and it's a great one. He remains one of our most powerful, rhythmic purveyors of country blues/roots, original and traditional ... The Fafard guitar (is) lean, lanky, alternately pounding and heartbreaking; not a superfluous phrase or lick, never a note out of place. In a long string of great recordings, it continues a tradition of greatness. Buy two; you'll want to give one to someone you like. — Jurgen Goethe, former host of CBC Disc Drive