De Danann was formed in the mists of time (around 1980 or so) by Galway fiddler Frankie Gavin, and Dublin-based guitar / bouzouki player Alec Finn. They were joined by Mairtin O'Connor on accordion and Johnny "Ringo" McDonagh on bodhran in those days. The line-up recorded several albums with guest singers like Dolores Keane, Mary Black, Maura O'Connell, and the lineup - and band name - underwent several changes down the years. 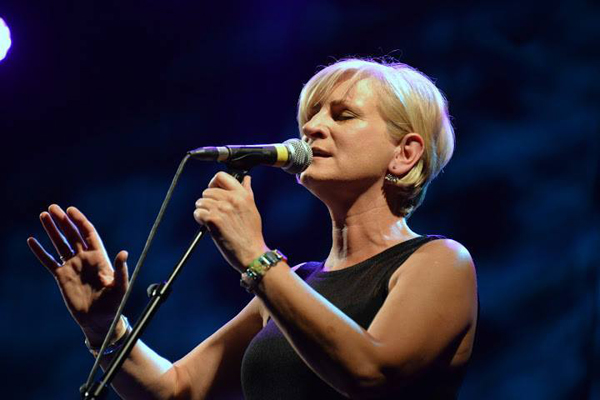 Singer Eleanor Shanley (above) took over the singing duties and when the band last appeared in town (1991 at the Celtica Festival, I think, although they may have played subsequently at the Vancouver Folk Music Festival,and they were definitely at the Mission Folk Music Festival a few years ago.) The band broke up in the 90s, and two groups were later formed: one with Frankie Gavin, and this one with Alec Finn and Eleanor Shanley, joined initially by McDonagh and former Four Men & A Dog banjoist Brian McGrath. De Danann released a wonderful comeback CD, WonderWaltz, in 2010 and they complete a tour of Western Canada with our show tomorrow night. New members Ronan O'Flaherty (fiddle) and Neill Lyons (bodhran - replacing "Ringo") embellish the band's sound, which is primarily instrumental - featuring some blistering reels and jigs, and very sophisticated arrangements of everything from Hey Jude to Mozart. On WonderWaltz, Eleanor Shanley sings three songs: two in English and one in Irish. Expect about 1/3 of their repertoire to be songs, the remainder will be instrumentals.

De Danann continue to be musical pioneers, and amongst the best-loved and most widely respected trad. bands in Ireland. We relish this rare chance to hear them at The Rogue! Tickets on sale here

We hope to see you there...

3. Radio Waves
The new CD by Irish-American supergroup The Gloaming arrived at Rogue Towers on Friday, and I featured three songs on The Saturday Edge On Folk last Saturday. I'll spin some new tunes from it over the next few weeks. Argentine twins Las Hermanas Caronni and Haitian group Lakou Mizik were featured on the latest sampler from English magazine fRoots and I was so smitten I just had to download the rest of their latest recordings. Tune in this Saturday to hear Las Hermanas covering a Doors' classic on cello and bass clarinet! I'll also have new music by Malian guitarist Delimady Tounkara, Steve Dawson, David Francey, Mavis Staples, Corin Raymond, Aziza Brahim, Eileen Ivers, Winnipeg's Small Glories, English trio Leveret, Welsh combo Calan, and Swedish trio Ode - plus some Easter songs and much more. I hope you can join me on CiTR fm 101.9 and www.citr.ca on Saturday from 8am to noon.