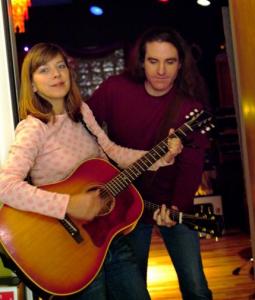 Texas singer Stacey Earle is the sister of Steve Earle and used to sing back-up for him. That's how she met Nashville guitar wizard Mark Stuart, who was also in Steve's band at the time. They have been married and touring as a couple for over a decade now, and there are few, if any, such gifted and enjoyable songwriting teams around. Stacey's earlier songs were some of the most articulate and impassioned anthems of single-parenting women ever made. Mark is also a fine songwriter, but it's his incredible versatility and skill as a guitarist that really stand out. A master of every style of roots and popular music that's worth listening to, he is truly one of the best. Their arrangements and vocal harmonies are also second to none.