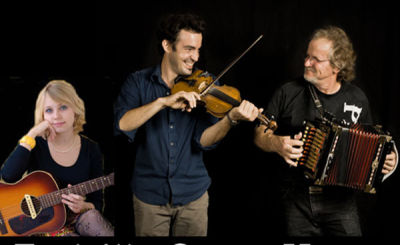 Joel Savoy is the fiddler with the Savoy Cajun Band from Louisiana. He will be joined by his wife Kelli Jones-Savoy on guitar, Cajun accordion wizard Jesse Lege, and Sammy Lind & Nadine Landry from the Foghorn Stringband for a full-on Cajun Dance at St. James Hall!

Jesse and Joel make music the way music should be made – full of spontaneity and joy. Together, they play Cajun dance hall music from the prairies of Southwest Louisiana where generations young and old alike come together to celebrate their vibrant culture by dancing, socializing and having a good time. Jesse Lége is the real deal. Growing up in a rural, pre-electricity home in Gueydan, Louisiana, Jesse spoke Cajun French and learned music from relatives, neighbors, and the family's much-loved battery-powered radio. Today he is one of the most admired Cajun accordionists and vocalists in the world, known especially for his high, clear, “crying” vocals. Jesse has been playing traditional Cajun music and singing Cajun French songs for over 30 years performing with a variety of well-known musicians in various Louisiana and southeast Texas dancehalls. He has been nominee and winner of numerous CFMA (Cajun French Music Association) awards: Traditional Band of the Year, Accordion Player of the Year, Male Vocalist of the Year, Band of the Year, Song of the Year (for "Memoires Dans Mon Coeur"). In 1998 he was inducted into the Cajun Music Hall of Fame.

Joel Savoy, son of Cajun music royalty Marc and Ann, grew up in the middle of a renaissance for the Cajun culture of southwest Louisiana. Exposure from an early age to a constant stream of musicians, folk festivals, and music industry gurus laid the basis for the entrepreneurial music career he began as a young teenager, developing a strong sense of musicality, good taste and creativity. In performance he represents his culture with an authority that few people his age can and his playing leaves no doubt that Cajun music is still very much alive. Well versed in music and a quick learner, he can be found playing with just about every band in SWLA a some time or other, though most often he’s seen with his brother Wilson and their parents in the Savoy Family Band. As a Cajun 30-something year-old living in a modern world, Joel is part of a growing group of young folks in SWLA dedicated to honoring, preserving and living the legacy that is Cajun culture, instigating and supporting traditional events such as the Courir de Mardi Gras and boucheries. In 2006 Joel founded Valcour Records which has since developed into what many believe to be the number one music source for what’s happening in Acadiana today, garnering one GRAMMY and 7 GRAMMY nominations to date. He’s worked and played with T-Bone Burnett, Steve Earle, Linda Ronstadt, and most recently John Fogerty. T-Bone Burnett summed it up when he said, "Everything Joel Savoy touches turns to music".