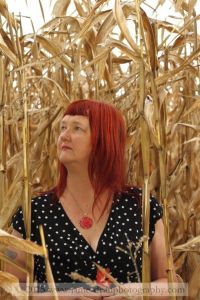 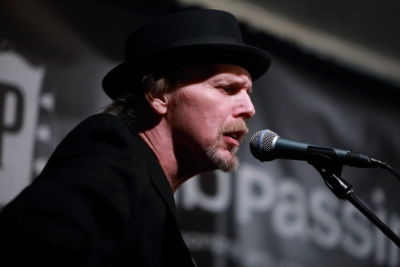 California’s Folsom State Prison occupies a hallowed place in the history of country music. As the location of several Johnny Cash performances and the subject of his song “Folsom Prison Blues,” it has become a symbol of the “outlaw” element of outlaw country. Now, some 60 years after Cash first put it on the map, the California State Prison complex has had a transformational impact on another country roots musician: Canada’s Linda McRae.

After answering a call to host a song-writing workshop at New Folsom in 2011, McRae and her husband, James Whitmire, were moved to develop song-writing workshops for at-risk youth – to try and prevent them from ending up behind bars in the first place. Her new, Steve Dawson-produced album, Shadow Trails, is inspired by that work.

Though perhaps best-known for her eight-year tenure as a member of the platinum-selling band Spirit of the West, Linda McRae had already raised a daughter and performed for more than ten years with west coast punk and roots outfits before joining Spirit. In fact, the band members were regulars at shows by her previous roots rock band, Terminal City. She joined Spirit in 1988 and is heard prominently on two of its most famous and enduring songs, “Home for a Rest” and “If Venice is Sinking.” In 1995, she and the band performed and recorded with Vancouver Symphony Orchestra and released the resulting recording, Open Heart Symphony.The following year, she left the Spirit to launch a solo career and has been charting at folk and roots radio ever since.

In 2006, McRae found love and much more with James Whitmire, a retired American rancher who had recently discovered his voice as a poet, and who put his skills to work trying to woo her. He told her he’d move wherever she dreamed of living, so the couple settled in Nashville, and Whitmire – who she pays tribute to on the album with the song “My Man” – became her manager, collaborator, and constant source of moral support while she’s out on the road. A recovered addict, who’s been clean for more than 25 years, Whitmire has life experience that many incarcerated individuals and at-risk youth relate to, and that has helped the couple build trusting connections through their therapeutic song-writing workshops.

That work, in turn, has inspired McRae, whose new album is chalk-full of raw, honest reflections on hardship delivered with a rough-hewn authenticity.

“Flowers of Appalachia” features a wistful, insightful poem by elderly New Folsom inmate Ken Blackburn set to a tender mostly-acoustic backdrop of banjo, guitars and bass. “Sidewalk Princess,” inspired by another poem by a Folsom inmate, is the fictionalized account of a homeless woman in Vancouver. “Jesus or Jail” drew its inspiration from the film “Searching for the Wrong-Eyed Jesus” and the message McRae took away from it: If you’re poor in the south, you have two choices: Jesus or jail. Other stand-out tracks on the album include “Why Can’t Waylon?” a fabulous outlaw country-style song that borrows an even more fabulous outlaw country –style utterance from the young son of McRae’s friend: “If Jesus can come back, why can’t Waylon?”. There’s also a stirring cover of Willie P. Bennett’s never-recorded number “When  Love is a Game,” featuring beautiful pedal steel by Dawson.

And then there’s “Singing River,” which tells the story of Teh-la-nay of the Yuchi nation. The nation called the Tennessee River the singing river because they believed a woman who lived in the river sang to them. When the nation was forcibly relocated to Oklahoma in the 1830s, Teh-la-nay walked for five years to return because she missed hearing the river’s song. The ancestral home of the Yuchi nation lies across the river from Muscle Shoals, Alabama, home of the legendary Fame recording studio, and some say the stream of seminal recordings that came out of Muscle Shoals can be attributed to a certain something in the water.

US singer-songwriter Thad Beckman will open for Linda at this show. Here he is in his own words:

Christmas Eve 1951: It started with a Santa Claus suit, a bottle of cheap bourbon and a momentary reprieve from the daily tumult of a bad marriage. A tradition in my family was to open one present on Christmas Eve. I know what my father unwrapped. Nine months later I was born. I can’t say it was a bad beginning but I’ve heard better stories.

11 years later. Christmas again: Under the tree, wrapped in white tissue paper and tied with red ribbon was a long cardboard box containing a guitar bought from the local department store for $13.97. The strings were so far off the frets it took a pair of vice grips to make any discernible musical sounds. A year and 52 guitar lessons later I could play Aura Lee and Amazing Grace and had the grip of a journeyman mechanic. That same year I made my performing debut with my best friend at the school talent show. A disaster. A year later, with money I made from my paper route I bought a Harmony electric guitar and a Kalamazoo II amplifier. It changed my life. The British invasion was upon us and me and my buddies would strap on our guitars, turn up the stereo full blast and lip sync along with our favorite tunes from the likes of The Beatles or The Dave Clark Five or The Rolling Stones or The Animals. It was glorious. Finally, we got up the courage to plug in our guitars and start playing the songs ourselves. I can’t say it was any good but there sure were a lot of thrills. Like the first time we figured out the chords to a song. It was The Last Train from Clarksville by The Monkees. We sat in my bedroom with a portable record player and moved the needle back and forth over the 45 until it was so scratched it was unlistenable. We finally figured it out though and we were on our way. Those were the days.

And that was a long time ago. A lot has gone on since; much of which need not be mentioned here. I will close now and add that I love the blues, Bach, Dylan, Hank Williams, Leonard Cohen, Thelonius Monk, Muddy Waters, The Rolling Stones, Johnny Cash, George Jones, Bill Evans, Bonnie Raitt,  Doc Watson, John Prine,  Billie Holiday – well, you get the idea. Much of what you’ve just read is true.

Thad will also give a guitar seminar on Nov 26, 7pm: