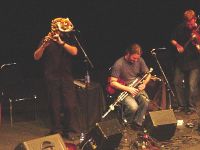 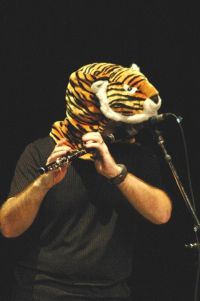 These photos don't even begin to tell the tale of last night's show [October 9th, 2004].

When Lunasa's Kevin Crawford emerged on stage with a tiger's head on his shoulders he had left the stage while Cillian Vallely played a pipe solo. Somehow he'd found a child's tiger suit, gone to the dressing room, stripped down to his underwear and tried to get into the suit.

One can only speculate as to the sight that awaited the other band members who had also vacated the stage during Cillian's solo. Kevin had managed to get his arms into the suit and his legs, but on trying to straighten up he found that the suit was way too small for him. And he was stuck! Looking like a sort of demented, half-sheared limbo-dancing tiger, writhing and snarling helplessly around the room! Apparently they had to wrestle him to the ground and pull the suit off him. Then he had to get dressed and return to the stage. All the while knowing that Cillian only plays through the tune twice.

He made it! And then played a tune with the tiger's head on. It was very hard to keep the camera steady I was laughing so hard!