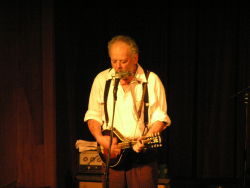 Sad news. Canadian folk singing legend Willie P Bennett died peacefully at his home in Ontario on Friday, aged 56. He was the most incredible harmonica player, and used to blow his lungs out with The Dixie Flyers. Then he went solo and wrote some gorgeous songs. He played a Rogue gig in April 1987, before we were The Rogue Folk Club. It was at The Savoy. The previous night he popped in to The Classical Joint round the corner on Carrall Street to play a few tunes. I will never forget the looks on the faces of Stephen Fearing and James Keelaghan as they dropped by to sing a few, and there was Willie P singing and "harping" on stage.

Willie stayed at our house that night, and I remember waking up around 2am and hearing him talking on the phone. He was still talking an hour so later, to his wife. It's OK, he said, when I knocked on his door and looked at him with some alarm about the cost of calling Ontario (this was 1987, remember. Long Distance was expensive then!) I'm paying for the call. He did, too.

More recently he's been playing in Fred Eaglesmith's marvellous band The Flying Squirrels. Willie took a back seat in the band, adding soulful mandolin and harp and vocals. For over 15 years! A few years back at a soundcheck at the Rogue (St. James Hall) he sang Fred's Freight Train, slowed right down. It was a spellbinding performance! Fred said he'd never heard him do that before. Definitely one of the most soul-stirring torch ballads I've ever heard!

He suffered a heart attack last Summer, and was advised to take a few months off. Apparently he was raring to go again, and had been working on a new CD and was planning a tour when he passed away.

Blackie & The Rodeo Kings made a CD of his songs, and then became a band and are still going strong. I look forward to meeting up with them in Memphis this week. We'll hoist a few to Willie's memory.