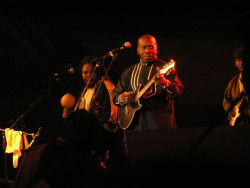 Andy's CD, Watina, was one of my Albums of 2007. It made it to many of the most prestigious Top CD Lists around the world. We saw Andy in Edmonton last Summer. Watina is a CD filled with wonderful music, with a hugely inspirational history. This is a tragic loss. Please read the following, then go out and buy the CD!

We are heartbroken to report that Andy Palacio passed away tonight at 9pm Belize time. The cause of death was a massive and extensive stroke to the brain, a heart attack and respiratory failure due to the previous two conditions. After having been waylaid in Mobile, Alabama while en route to emergency care in Chicago, Andy had been brought back to a hospital in Belize last night so that he could die in his homeland.

Words can't express the sorrow we feel at the loss of such a tremendous person and artist.

A more formal press release is copied below. Please pass this information on to the countless people around the world who have been impacted by Andy's music and message. Feel free to post this announcement to your email lists or blogs, as we want to make sure that everyone who knows Andy or his music are aware of what has happened.

We are together at the Cumbancha office in Vermont. Ivan will be heading to Belize as soon as possible to attend the funeral ceremonies and the tribute concert that is planned for this coming Friday.

In the Garifuna culture the death of a loved one is an opportunity to celebrate their memory and rejoice in having been blessed to have had them in your life. We feel so fortunate to have known this incredible individual and we mourn the loss of truly great man.

In an interview conducted last July, Andy was asked how he wanted to be remembered when he died. He replied, As a proud Garifuna...someone who instills pride in Garifuna and raises their self-esteem. To me, that's the most important thing. This was already the case while he was alive, and we're certain it will only be more true in the future. 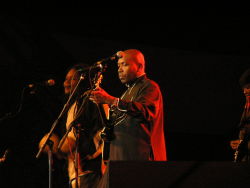 January 19, 2008 - Andy Palacio, an iconic musician and cultural activist in his native Belize and impassioned spokesperson for the Garifuna people of Central America, was declared dead tonight at 9pm Belize time due to a massive and extensive stroke to the brain, a heart attack and respiratory failure due to the previous two conditions.

Palacio, 47, started feeling poorly last week and eventually visited a doctor with complaints of dizziness and blurred vision. On the 16th of January, he began experiencing seizures and was rushed to a hospital in Belmopan, Belize and then on to another hospital in Belize City. At this point, most people were hopeful Palacio would recover.

On January 17th, Palacio's condition worsened and he began experiencing more seizures. He was placed on an air ambulance to Chicago where he was expected to get treatment at one of the premier neurological facilities in the country. En route to Chicago, the plane stopped in Mobile, Alabama to clear immigration. At that point, Palacio was unconscious and it was determined that he was too ill to continue on the flight to Chicago. He was rushed to a hospital in Mobile, and placed on life support. There, doctors determined that the damage to his brain function was severe, and that his chances of recovery were slim. On January 18th, his family requested that he be flown back to Belize so that he might die in his homeland.

A national hero in Belize for his popular music and advocacy of Garifuna language and culture, news of Palacio's condition sent shockwaves through the community. At 5pm today, a public service was held in Belize City for Palacio as people prayed for his recovery. Ceremonies were also held by Garifuna spiritual leaders in an effort to help with the situation. Belize is in the midst of a heated election, but the local news was entirely dominated by Palacio's health crisis.

The reaction has also been strong around the world. Until the recent turn of events, the past year had been one of tremendous accomplishment for Palacio as his album Watina, which was released at the beginning of 2007, had become one of the most critically acclaimed recordings of the year in any genre. Perhaps the most unanimously revered world music album in recent memory, Watina appeared on dozens of Best of the Year lists in major media outlets around the globe and was roundly praised in glowing terms.

In 2007, Palacio was named a UNESCO Artist for Peace and won the prestigious WOMEX Award. Watina was also nominated for the BBC Radio 3 World Music Awards. At home in Belize, the international success of Watina has sparked a revival of Garifuna music, as young musicians have become inspired by Palacio's example. Even in the days since Palacio's health crisis began, the accolades have continued to pour in for his work.

That Palacio has been struck down at a moment of such international acclaim only increases the sense of shock and tragedy felt at his sudden and untimely death.

Andy Palacio will be honored with an official state funeral. A massive tribute concert is planned in Belize City on Friday, January 25th.

Friends and supporters are invited to post messages in memory of Andy Palacio to his MySpace page (www.myspace.com/andypalacio) as well as to the blog of his international record label Cumbancha (cumbanchamusic.blogspot.com). 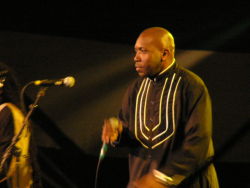 Andy Palacio was not only the most popular musician in Belize, he was also a serious music and cultural activist with a deep commitment to preserving his unique Garifuna culture. Long a leading proponent of Garifuna popular music and a tireless advocate for the maintenance of the Garifuna language and traditions, Palacio recently achieved international acclaim for his work as a recording and performing artist thanks to the critical success of his early 2007 album Wetina.

Andy Vivien Palacio was born in the small coastal village of Barranco, Belize on December 2, 1960. Palacio grew up listening to traditional Garifuna music as well as imported sounds coming over the radio from neighboring Honduras, Guatemala, the Caribbean and the United States. Music was always a part of daily life, said Palacio, It was the soundtrack that we lived to. Along with some of his peers, he joined local bands even while in high school and began developing his own voice, performing covers of popular Caribbean and Top 40 songs.

However, it was while working with a literacy project on Nicaragua's Atlantic Coast in 1980 and discovering that the Garifuna language and culture was steadily dying in that country, that a strong cultural awareness took hold and his approach to music became more defined. I saw what had happened to my people in Nicaragua. The cultural erosion I saw there deeply affected my outlook, he said in late 2006, and I definitely had to react to that reality. His reaction took the form of diving deeper into the language and rhythms of the Garifuna, a unique cultural blend of West African and Indigenous Carib and Arawak Indian language and heritage. It was a conscious strategy. I felt that music was an excellent medium to preserve the culture. I saw it as a way of maintaining cultural pride and self esteem, especially in young people.

Palacio became a leading figure in a growing renaissance of young Garifuna intellectuals who were writing poetry and songs in their native language. He saw the emergence of an upbeat, popular dance form based on Garifuna rhythms that became known as punta rock and enthusiastically took part in developing the form. Andy began performing his own songs and gained stature as a musician and energetic Garifuna artist. In 1987, he was able to hone his skills after being invited to work in England with Cultural Partnerships Limited, a community arts organization. Returning home to Belize with new skills and a four track recording system, he helped found Sunrise, an organization dedicated to preserving, documenting and distributing Belizean music. While his academic background and self-scholarship allowed for his on-going documentation of Garifuna culture through lyrics and music, it is his exuberance as a performer that has helped earn him worldwide recognition.

Palacio also brought his passion for Garifuna culture into the public sector. In December 2004, Palacio was appointed Cultural Ambassador and Deputy Administrator of the National Institute of Culture and History of Belize.

About five years ago, Belizean producer Ivan Duran, Palacio's longtime collaborator and founder of the local label Stonetree Records, convinced Palacio that he should focus on less commercial forms of Garifuna music and look more deeply into its soul and roots. Duran and Palacio set out to create an all-star, multi-generational ensemble of some of the best Garifuna musicians from Guatemala, Honduras and Belize. The Garifuna Collective unites elder statesmen such as legendary Garifuna composer Paul Nabor, with up-and-coming voices of the new generation such as Aurelio Martinez from Honduras and Adrien Martinez from Belize. Rather then focusing solely on danceable styles like punta rock, the Collective explores the more soulful side of Garifuna music, such as the Latin-influenced paranda, and the sacred d|g|, punta and gunjei rhythms.

Palacio and Duran embarked on the production of Watina, an album that would come to redefine modern Garifuna music and become one of the most critically-acclaimed world music releases of 2007. The initial recording sessions for this exceptional album took place over a 4-month period in an improvised studio inside a thatch-roofed cabin by the sea in the small village of Hopkins, Belize. It was an informal environment, where the musicians spent many hours playing together late into the night, honing the arrangements of the songs that would eventually end up on this album. While the traditions provided the inspiration, the musicians also added contemporary elements that helped give the songs relevance to their modern context. After the sessions, Ivan Duran worked tirelessly back at his studio to craft what is surely the pinnacle of Garifuna music production to date.

Watina, which was released at the beginning of 2007, became one of the most critically acclaimed recordings of the year in any genre. Perhaps the most unanimously revered world music album in recent memory, Watina appeared on dozens of Best of the Year lists in major media outlets around the globe and was roundly praised in glowing terms. These best-of lists put an exclamation point on what had been an incredible year for Andy Palacio and the worldwide recognition of Garifuna music. In November, 2007, Palacio became the first Caribbean and Central American artist to be designated awas named a UNESCO Artist for Peace. He received the prestigious WOMEX Award in October, 2007 which was co-awarded to Ivan Duran. In September, 2007 Palacio was conferred the Order of Meritorious Service by the Prime Minister of Belize. Watina was also nominated for the influential BBC Radio 3 World Music Awards. At home in Belize, the international success of Watina has sparked a revival of Garifuna music, as young musicians have become inspired by Palacio's example.