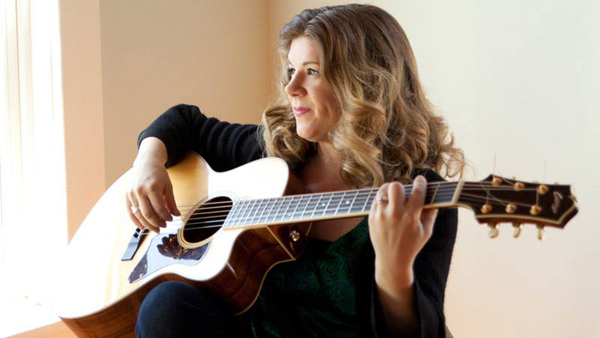 A new album by Dar Williams feels, to me, like receiving a letter from an old friend, where each paragraph - or song - tells a story. She is a totally compelling story teller in song, and we are delighted to be able to bring her back to The Rogue. A couple of years ago she called me over to her table at a showcase venue at the Folk Alliance in Toronto and implored me to bring her back to Vancouver. We presented that concert at St. James almost exactly two years ago. She was accompanied by Bryn Roberts on keyboards. Bryn hails from Kelowna, and will again accompany Dar. Her new CD, Emerald, came out in July. I love the cover of Joe Strummer's Johnny Appleseed, and there's a celebration of FM Radio too. Bees and radio; two of my favourite things! The more reflective songs are my favourites, though. The songs that wrap you up like a warm blanket on a cold night, and fire your imagination as she sweeps you up and carries you into her secret world. There are heaps of songwriters out there, but none quite as arresting as Dar Williams. For more information visit www.darwilliams.com

Vancouver songwriter Lydia Hol will start the show with a short set. Lydia started working at The Rogue over the summer, and starred at the Mission Folk Music Festival in July. When Dar's people asked us to recommend some local songwriters to open the show they chose Lydia. Since the release of her debut EP, Boats, in 2012, Lydia has toured the country from coast to coast, filling rooms with her songs and stories. She’s shared the stage with folk legend Sylvia Tyson and become a favorite on the CBC. Lydia’s time spent living in Ireland flavours her performances with a storyteller’s honesty and charm. Her new full length record Heading North, is set to be released in January 2016, capturing a delicate, elegant take on folk, with tinges of everything from country to classical and beyond. www.lydiahol.com
Tickets are going fast. They will only be on sale on our website until 2pm on Saturday, and we don't take reservations on the day of the show, so act fast if you haven't already booked your tickets.
2. Red Moon Road, Friday October 30th, 8pm, St. James Hall (3214 West 10th Avenue)

Winnipeg trio Red Moon Road were my "discovery of the year" last year. They played here at the end of November and were totally captivating, with their stories embellishing their songs and their incredible voices filling the hall to the rafters. Sheena Rattai is an amazing singer; one of Canada's finest voices, for sure. The guys in the band are both called Daniel. The family history of each band member forms the basis of many of their songs and stories. They have just released Sorrows & Glories, their second full-length CD, 12 months after the release of their remarkable EP, Tales From The White Shell - which they recorded in an ice-fishing shack on a frozen lake, hauling their recording gear on a sled! The new CD is another excellent collection of uniquely entertaining songs, but the best way to hear these songs is to see the band perform live and to experience the atmospheric landscapes they conjure up on stage. www.redmoonroad.com

Opening for RMR is Vancouver trio The Wahs. Cam Wilson and Andy Hillhouse were stalwart members of Vancouver Celtic Funk combo Mad Pudding a decade and more ago. Since then Andy has travelled the country from east to west, earning a PhD in Ethnomusicology and is now Artistic Director at the Harrison Festival of the Arts. Cam played in the VSO and with Jazz combo Joe Trio before forming the excellent gypsy jazz quartet Van Django. The bass player in that band is Brent Gubbels, who is also the 3rd member of The Wahs. They recorded a demo CD in 2002 and played a few shows before Andy headed east. Now he's back out west they have teamed up again, and we can't wait to hear their new tunes!
4. Radio Waves

I hope you can join me on The Edge On Folk on CiTR fm 101.9 from 8am to noon tomorrow (Saturday) for 4 hours of the very best in World / Roots / Folk music. The show comes from the swanky new studios at The Nest, UBC's new student union building, and it's streamed live on www.citr.ca I'll have some new music from Celtic Colours, from Patty Griffin, Buckman Coe, Cousin Harley, Martha Scanlan, etc. as well as a feature on her Dar-ness, and much more!

5. Facebook
Please like us on Facebook at www.facebook.com/RogueFolkClub and friend me on Facebook on www.facebook.com/TheEdge19 That way you'll get even more current information, and exclusive photos and hints about upcoming songs on The Edge On Folk, etc.
Oct 14, 2015Oct 30, 2015