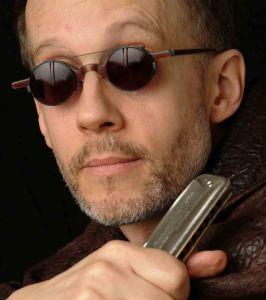 Playing a ten hole diatonic harmonica, Carlos has developed the unique ability to play chromatically by using a recently developed "overblow" technique taught to him by jazz virtuoso Howard Levy. Overall, this approach to the diatonic harmonica, although much more difficult to achieve, is in many ways more expressive and communicative than the mechanized tone produced by the chromatic harmonica. Carlos is one of the few pioneers of this overblow method, bringing musical credibility to what has still been considered by many in the music industry - a fringe folk instrument. The sophisticated sound produced by del Junco is at once sensitive, soulful, and sexy while never forgetting the rawness inherent in blues music.