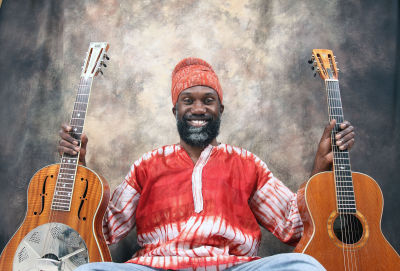 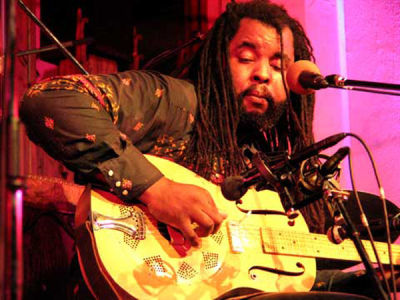 Hosted by Corey Harris, a MacArthur Grant recipient, and featuring renowned roots musician Alvin Youngblood Hart, True Blues chronicles the extraordinary living culture of the blues in an evening of music and conversation. In bringing the True Blues film to the concert stage, the True Blues concert vividly brings to life this crucial wellspring of American music.

Both Corey Harris and Alvin Youngblood Hart were featured in Martin Scorcese’s “The Blues: A Musical Journey,” which followed Corey on a roots journey to West Africa. Alvin contributed, as well, to Wim Wenders’ ”The Soul Of a Man” and Denzel Washington’s “The Great Debaters.”

Blues is at the centre of their artistry, and the blues takes center stage in True Blues, the concert.

Corey Harris is a guitarist, vocalist, songwriter and band leader who has carved out his own niche in blues. A powerful singer and accomplished guitarist, he has appeared at venues throughout the North America, Europe, Brazil, The Caribbean, West Africa, Asia, Australia and New Zealand.

He began his career as a New Orleans street singer, travelling throughout the southern U.S. In his early twenties he lived in Cameroon, West Africa for a year, which had a profound effect on his later work. He has recorded many old songs of the blues tradition while also creating an original vision of the blues by adding influences from reggae, soul, rock and West African music. His 1995 recording, Between Midnight and Day, is a tribute to the tradition of acoustic blues. Subsequent recordings, such as Greens From the Garden (1999), Mississippi to Mali (2003), and Daily Bread (2005) show Harris’ maturation from interpreter to songwriter. Some of his imaginative compositions are marked by a deliberate eclecticism; other works stay true to the traditional blues formula of compelling vocals and down-home guitar. With one foot in tradition and the other in contemporary experimentation, Harris is a truly unique voice in contemporary music.

Alvin Youngblood Hart is the cosmic American love child of Howlin Wolf and Link Wray! Known as a “musician’s musician,” Hart’s praises have been sung by everyone from Bob Dylan to Brit guitar gods Eric Clapton & Mick Taylor.

A devout follower of the “no barriers” approach carved out by veteran performers like Gatemouth Brown and the late/great Doug Sahm, he aims to delight the masses and points to challenge the so-called blues purists.

Since the release of his 1996 debut recording, the all-acoustic BIG MAMA’S DOOR, Hart has relayed his eclectic musical message around the world.