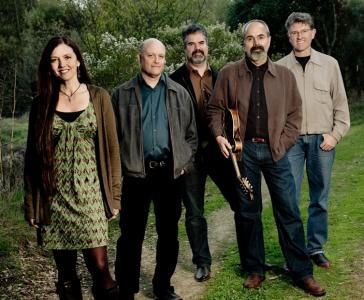 I can't think of a better-balanced bluegrass band working today. While there are more frenetic and more notes-per-second bluegrass music out there, I can't think of a more polished, subtle, and thoughtful approach to bluegrass than "Vintage & Unique." This one gets my highest recommendation. – Hermon Joyner, Audiophile Audition

Calling all fans of bluegrass, traditional and original acoustic music! John Reischman & The Jaybirds are playing a concert to celebrate the release of Vintage & Unique, their fifth album.

It's always a thrill to see these musicians play live and they'll be highlighting songs from the new album where once again they have recorded a collection of songs that showcases what they do best. They go back to the roots of bluegrass and old-time music for their inspiration, and spin these roots into a new sound. On Vintage & Unique, you'll hear the Jaybirds cover songs and tunes from Bill Monroe, Hobart Smith, and Hazel Dickens & Alice Gerrard, but the real gems of the album are the band's originals. While these songs and tunes are clearly informed by the tradition, John Reischman & The Jaybirds have an eclectic creativity that guides their refreshing excursions in acoustic roots music. Throughout, the bluegrass harmonies are spot-on, and each instrumental break crackles with energy.

John Reischman and The Jaybirds are one very fine bluegrass act. With five critically acclaimed albums and two Juno nominations, the Jaybirds have established themselves as one of the freshest, most tasteful bands on the acoustic music scene today. The group fashions a stylish, elegant take on bluegrass that is at once innovative and unadorned, sophisticated and stripped-down, happily old-fashioned, yet unselfconsciously new. Their live shows feature their studied performance of original songs, instrumentals, and newly arranged traditional material mixed with the fun of watching the Jaybirds skillfully weave around one centre microphone and the band's genial and often humorous MC work. If you're a fan of acoustic music, you know - it doesn't get much better than this.

So, come on down to St. James Hall on December 2 for the release of Vintage & Unique. You're sure to discover some new gems and hear some old favourites. Hey, it's December, you might even hear a few holiday tunes delivered Jaybirds style.