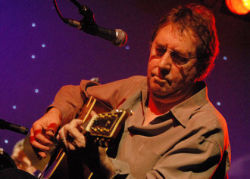 From the mid '60s to the early '70s Scottish guitarist and singer-songwriter Bert Jansch was one of the most revered and influential figures of the U.K. music scene - whether folk, blues, or rock. His self-titled solo debut sold 150 000 copies, an impressive figure for 1965. The mix of original and traditional songs, Jansch's stellar fingerpicking and his low-key, slightly gruff vocals sparked the imaginations of musicians as diverse as Jimmy Page, Donovan, Nick Drake, and Neil Young.

In the space of four years the prolific Jansch put out six albums, including Bert and John with fellow acoustic-axeman John Renbourn. The pair created a new style of guitar-playing, and co-founded the legendary quintet Pentangle - exploring the largely neglected territory between traditional and contemporary folk and jazz.

After Pentangle folded in 1974 Jansch resumed his solo career and, while he's never quite regained the popularity he once enjoyed, he's continued to reach new generations of musicians. Guitarists Johnny Marr of the Smiths, and Bernard Butler of Suede both cite Jansch as a mentor, and have worked with him. Most recently he's got together with singer Beth Orton and Indie roots artist Devendra Banhart who appear on Jansch's latest release Black Swan.

Who were the musicians that inspired and helped you as a guitarist in the early days?

Davey Graham is one of the earliest influences on my playing, but prior to him I was taught by his sister Jill. At the folk clubs in Edinburgh I was listening to people doing Woody Guthrie, Brownie McGhee, and people like that. I took lessons from a local guitar-player called Len Partridge who had a great blues voice

And as a songwriter?

To begin with I was more interested in the guitar, although I did start writing - instinctively, I suppose. Songwriting didn't really take off in my head until I got down to London and heard singers like Jackson C. Frank, who wrote "The Blues Still Run the Game" - a song that I still play at my shows. Clive Palmer, who was a member of the original Incredible String Band, also had a lot of influence on my writing.

What was the singer-songwriter scene in the U.K. like in the early '60s?

It was practically non-existent! Whether we're talking about folk or pop or rock, musicians didn't create their own songs - these were provided by specialist writers. And even the traditional singers would only have a handful of songs that they performed. You'd find that folklorists like A.L Lloyd in England or Hamish Henderson in Scotland would supply them with some of the material that they'd collected. [Scottish Traveller] Jeannie Robertson was one of the singers that Hamish fed. The more she became known the more she needed new material.

Are you comfortable with the tag 'folk baroque' in relation to your instrumental style?

I think of what I do more as folk and blues together. The folk baroque thing was really something that came out of Pentangle, from John Renbourn and myself. He was really into Early Music and we used to listen to [classical lute-player] Julian Bream and others, We mixed it up with blues and the odd jazz thing.

It seems that the British folk scene was more eclectic in the '60s -with a lot of cross-over with blues, pop, and rock.

Oh yeah. You had to know what was in and what most people were listening to. I heard as much jazz as folk - John Coltrane, Miles Davis, people like that. It was particularly true when Pentangle got started, because [bassist] Danny Thompson and [drummer] Terry were both jazz musicians.

How did Pentangle come to be formed?

It was fairly organic. When I first came to London in the mid'60s I met players like John Renbourn, and because we were both looking for somewhere to stay we ended up sharing a flat for two or three years. We were both beginning to record and playing down at the Cousins, which was a 'general' folk club, where you would hear anything from traditional singers to people like Roy Harper, Nick Drake, and Ralph McTell. John and I wanted to have a club that was more closely related to the more bluesy and jazzy stuff we were doing. So we started our own club called the Horseshoe, and we'd just invite musicians along who were passing through town, We had a vague plan of putting together a band and then John met Danny and Terry, who were backing [London-based U.S. folksinger] Julie Felix at the time, and invited them to our club. John had been singing and playing with Jacqui McShee almost since childhood, so we brought her in, and that was the start of Pentangle.

You always seemed a bit uncomfortable in the limelight in Pentangle.

Out of the whole band I was the one who would be the spokesman - so if I was introverted you can imagine what the others were like! And there was a time in my solo career when I wouldn't do interviews at all - which pleased the record companies no end! Today I'm quite happy to chat away.

I've always felt that the combination of jazz and folk opens up a huge musical territory - and very few groups other than Pentangle have explored it much.

I think that's true. What happened at the time is that an offshoot of the whole folk thing became folk rock, with bands like Fairport Convention, Fotheringay, and Steeleye Span. It was much more appealing to most people because you could dance to it. Whereas with Pentangle you had to listen more. That was the difference. You couldn't just get up and dance to it - well I suppose you could if you were stoned enough!

"Blackwaterside" is a traditional song that's closely associated with you. Where did you learn it?

It's an Irish song, and was quite well-known. Anne Briggs used to do it, and she sat down with me one time and sang the tune.

Led Zeppelin's lead-guitarist Jimmy Page took the song and your arrangement of it and recorded it as an instrumental piece - "Black Mountain Side" - on the band's first album, claiming it all as his own. Was there a lawsuit on your part?

Yes there was, but we ran out of money to proceed with it.

I read that Jimmy still can't look you in the eye.

He doesn't like to meet me, let's put it that way.

Turning to your latest solo album Black Swan. Several tracks feature Beth Orton - how long have you been working together?

We met at a gig about two years ago, and have been friends ever since. Initially she asked me to give her some guitar lessons, but she really doesn't need any. I asked Beth to sing on the album, and she's the one who suggested doing "Katie Cruel". I've known about English and Irish versions of it, but the one she does is American.

And how did you come to have Devendra Banhart on the recording?

It was through Noah Georgeson, who's a member of his band, and also his producer. On a friend's suggestion I asked Noah to help out when I felt my album needed a bit more direction. He was in town doing a show with Devendra so I got him and his band to help out as well. And last year I did shows in San Francisco and L.A. with Devendra as well for Neil Young's Bridge School benefit, which happens once a year. I was a member of Devendra's band for a week, which was great.

You do a very soulful and bluesy version of the well-known Irish song "The Old Triangle" on Black Swan - where and when did you learn that?

I got it from Dominic Behan whom I first heard sing it in the Crown Bar , a club in Edinburgh, when I was 16. I remember he was there with the great traditional singer Joe Heaney. The tune is traditional but Dominic's brother Brendan put the words to it as part of one of his plays, The Quare Fellow. He said it was a song against capital punishment in Ireland. It stuck in my mind for a long time.

What are your current projects as a musician?

I've just updated my home studio, where I've done my last three albums and have started work on the next one. And in 2008 Pentangle is doing a concert in London, so that's looking good.

Is that just a one-off gig?

Not necessarily. It depends on how it goes.

So there's a possibility of Pentangle reforming?