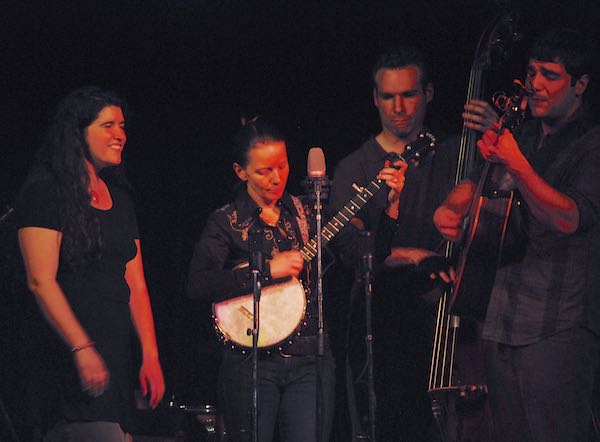 On this day in 2010 we presented the CD launch for Vancouver's old time stringband Plough at St. James Hall, with a couple of guests and opening act Leah Abramson also on the bill.

Back in 2002 we brought Pied Pumkin to the Wise Hall. This was their official tour to mark their reunion, as opposed to the occasional reunion tours they had sprinkled around the west over the previous decade or so. You can read all about them on Page 4 of our June 2002 Rogue Folk Review.

1991 saw another of those very special nights that may only happen once but which live long in the memory and stand as a supreme example of the wonders of music and the pivotal role played by small, non-profit organizations like The Rogue. We presented a concert with West Vancouver's Ann Mortifee accompanied by Themba Tana and African Heritage at the Wise Hall. Ann was born and raised in South Africa before her family moved to BC in the 70s (I think). She made her name in musical theatre and in New Age concerts with the brilliant flautist Paul Horn, but she never lost her love of African music and this concert enabled her to reach back and celebrate her roots with fellow South African Themba Tana and his band (I couldn't find any entries for Themba on the web, but the hyperlink takes you to the Canadian Encyclopaedia listing for Expo 86, and the huge list of Canadian performers includes him!) You can read all about our special show in our June 1991 Review.

On the cover of our June 1990 Review you will find our first Loudon Wainwright concert. It was at the Wise Hall, which is notorious for having no bathroom in the green room. He wrote a song which makes mention of "pissing in the sink". There used to be a kitchen next to the green room, and he complained to me about not having anywhere to pee - except in the sink. I don't know if he wrote that song about the Wise, and I can't remember which song it was, but it makes a good story!