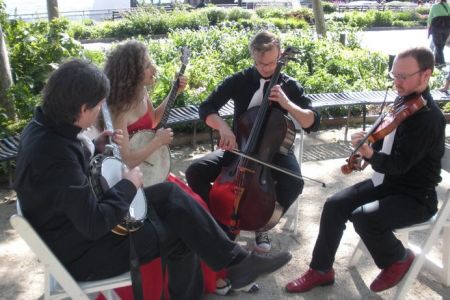 Abigail Washburn never set out to be a songwriter or a recording artist. Five years ago when she found herself on stage in a smoke-filled Beijing club playing her banjo and singing old-time Appalachian mountain music in Chinese to a packed house, she was as surprised as anyone. "A daring, definite talent, whose feel for the folk idiom results in moving material. Soulful is the word," hailed the Wall Street Journal in 2005, during that same tour of China. "On stage, her voice resonated with the power of a seasoned performer and her poetic hill tunes sounded all the more evocative in Chinese." As an "artist who best embodies the notion of Americana as a worldwide musical language" (The Tennessean), Abigail has created a new sound – a sound that challenges traditional notions of country and culture, embodied in the raw, transcendental music of the Sparrow Quartet. The all-star collaboration featuring Béla Fleck, acclaimed cellist Ben Sollee and Grammy-nominated fiddler, Casey Driessen unveiled Abigail Washburn & the Sparrow Quartet in May 2008 (Nettwerk).

Produced by Béla Fleck and composed / arranged by the unconventional foursome, this record is Abigail's moment to "intentionally create art that is more than what I ever thought I was capable of," says Washburn. Abigail Washburn & The Sparrow Quartet became an "intimate exploration of crossing global and cultural lines within myself," says Abigail, who feels a reverence for both American and Chinese cultures. "As more and more people engage in this struggle for a new direction for the human spirit, we'll recognize that we're morphing into a global species."

The unprecedented combination of two banjos (clawhammer and three-finger-style), cello and five-string fiddle unfolds - live and on record – in a dreamlike chamber suite. From the flawless "Overture" and harrowing revival, "Strange Things," to the interplanetary, Puccini-inspired old-time fairy tale, "Great Big Wall in China." "These musicians allowed me to dream big, and they had the chops to execute it all, and then some," says Washburn. "This next phase is hardly a lone journey."

The Quartet headlined most of the major festivals in western Canada this summer, including Vancouver, and Bela Fleck's new film of his musical travels in Africa has just been accepted by the Vancouver international Film festival. We are thrilled to be able to bring this band to town to mark the occasion. Watch for details of an opening set by the wonderful Vancouver Chinese bluegrass crossover combo Red Chamber.