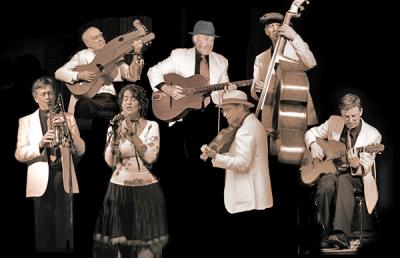 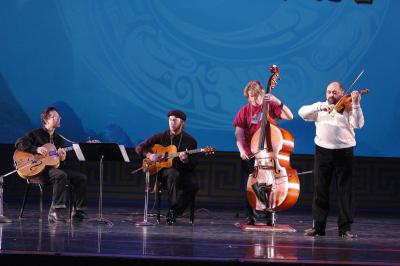 The 5th Annual April In Paris festival of gypsy jazz kicks off with a Gala Opening Night Concert featuring two of Vancouver's most enduring bands: Lache Cercel's Roma Swing Ensemble and Deanna Knight and The Hot Club Of Mars.

Learn the basic moves. This workshop is FREE, and is recommended for increased enjoyment of the festival. In the Hall.

To say that Lache Cercel is a classically trained violinist from Romania would be like saying that Eric Clapton can play the guitar. He is an enormously gifted musician, equally at home with the classics, jazz, or gypsy music. A devotee of Stephane Grappelli and of Yehudi Meuhin, Lache can bring "serious" music down to earth, and make gypsy jazz soar into the highest echelons. Last year he brought a troupe of gypsy dancers, and a couple of singers from Russia and the Balkans for a colourful and spectacular show - tracing the roots of gypsy jazz into Romania and beyond - and bringing it all up to the present with his hot band. Driving the rhythms are guitarists Don Ogilvie and Steven Nikleva and bassist Sam Shoichet - and probably a few more musicians besides. Maybe the lovely blonde singer from last year's show as well. That's the thing with Lache, you never quite know what he's going to do next, but you can rest assured that it will be brilliant music!

Deanna Knight landed the job as chanteuse with the Hot Club Of Mars by telling guitarist / band leader / famed luthier Michael Dunn that she had made a CD of my own material, sung jazz standards with a big band, run my own singing telegram service, oh, and attended 54 Grateful Dead concerts. Michael said: you're hired. Let's play some tunes! The Hotties, as they are affectionately known, like to think of themselves as extraterrestrial musical raiders. They certainly infuse their music with plenty of red hot playing, and they morphed from the Kitsilano Kat Kickers into the Hot club Of Mars via the Martian Embassy Juju Orchestra a few years back! They boast a triple threat on gypsy guitars: Michael Dunn, Steve "Bugsy" Szabo and Don Kellett, with bassist Charlie Knowles - who also produced their debut CD, Gypsy Fire - violinist Tom Neville and sax / flute / harmonica wizard Mark Dowding completing the line-up. One more thing about Michael Dunn's luthier skills: his guitars are world famous, so much so that they even flew in one specially made for the Oscars a while back!

Watch for details of hands-on workshops in swing guitar with Michael Dunn and Don Ogilvie, gypsy fiddle with Lache Cercel, and maybe even some Windgod lessons from Mark Dowding too.

We also hope to have a Wine-Tasting / Food Pairing Event on Opening Night.