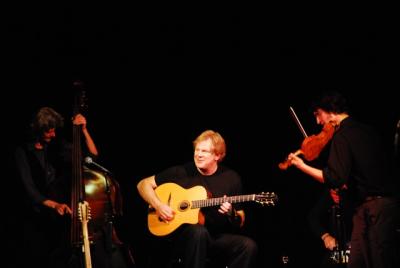 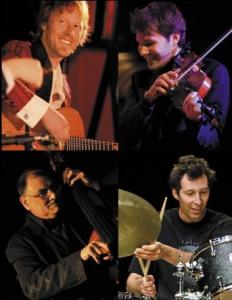 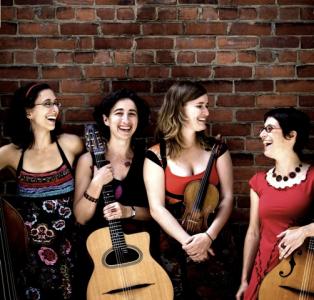 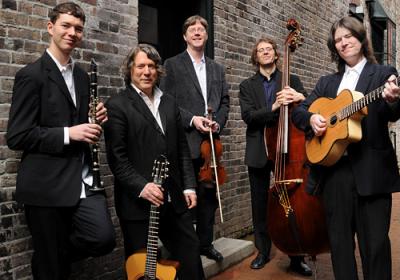 Second show: Theme 2: Songs and North-American swings
With songs (originals and interpretations) from Quebec, in French and in English including jazz standards from North-America

Hornby Island resident Marc Atkinson brings his new quartet to the festival, while another band that has featured in every edition of April In Paris so far - Van Django - completes the line-up for the finale concert.

John Jorgenson (shown above in action at last year's April In Paris festival) will doubtless have some similar surprises up his sleeve. With three stunning CDs of gypsy jazz under his belt (Franco-American Swing, Ultraspontane, and last year's One Stolen Night) plus the remarkable orchestral collaboration Istiqbal, he won't be short of material! Last year he played some tunes on clarinet, and was especially amazing on bouzouki. So expect the unexpected!

The Marc Atkinson Quartet features Marc on lead guitar, Adrian Dolan on fiddle and accordion, Joey Smith on acoustic bass and Kelby McNayr on drums. Marc is well-known as the mandolin player in The Bills, alongside the amazing Adrian Dolan of course. Joey Smith came to Victoria from Tennessee via the Glen Miller Orchestra and is one of the finest jazz bassists around. Kelby McNayr played at The Rogue in February with Oliver Swain's Big Machine, displaying some impressive drumming techniques - not always using sticks, and not always using them conventionally, either! Last year Marc brought Caravan to the festival - with Daniel Lapp on fiddle and trumpet. Now it's another hot new band guaranteed to rock your world with their scintillating gypsy jazz originals and Django covers. Can't wait!

Van Django is an acoustic string ensemble whose music is well-rooted in the gypsy jazz of 1930's Paris France. Their music is infused with flights of dazzling fancy, driving rhythms and boundless creativity. The band was formed as a quartet in 1998 made up of four of Canada's most talented and eclectic musicians - violinist Cameron Wilson, guitarist Budge Schachte, guitarist/cellist Finn Manniche and bassist Brent Gubbels. More recently they have added the amazing young clarinettist and singer Evan Arntzen - from B.C.'s first family of jazz - and often play with a drummer as well.

Since the group's formation they have toured throughout Canada and more recently, are making inroads internationally with forays into the US and abroad, including two European tours in the past couple of years. They have twice been featured guests of the Seattle Symphony Orchestra and have performed in a shared concert appearance with the John Jorgenson Quintet at "Djangofest Northwest" in Western Washington September 2008 as well as a return performance in September 2009. The members have collectively played on over 30 feature film soundtracks as well as collaborations with well known Canadian and international music artists. They have been featured regularly on CBC radio and released their debut CD Tiptoe Trip in 2006. The group recorded their 2nd CD for release in 2011. Experience this band playing their original compositions and quirky arrangements in an action packed musical universe they call, "acoustic string hot jazz!"

Watch for more details of the festival, including workshops on rhythm guitar (Don Ogilvie of Roma Swin and Michael Dunn of Hot Club of Mars), Intro to Gypsy Jazz (John Jorgenson), gypsy fiddle (Lache Cercel), Intro to Swing Dance, improvisational / lead guitar (Budge Schachte of Van Django) plus other workshops offered by Christine Tassan and various other members of the groups.

We will have our famous Paris-style Bistro too, with events starting at 5pm on Saturday and 3pm on Sunday. Each concert will conclude with a jam.

April In Paris will be so good this year it will last into May!