"Like James Taylor's voice or B.B. King's guitar, Alison Brown's banjo is an instrument possessed of a unique sonic signature and an inescapable beauty."
– Billboard Magazine 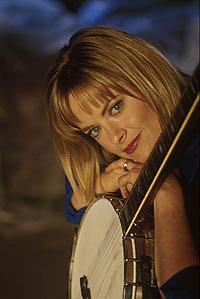 Alison Brown is one of my favourite artists. An incredible banjo player, her right hand seems to be motionless, but her fingers are absolutely flying over the strings as she powers through a fierce bluegrass number. It's her catholic taste in music that I like best. Her music is not for pigeonholing! Bluegrass, Jazz, Celtic, Country, Pop, Jam Band - she's all of these and none of them, too. With a superb backing band that comprises the diminutive piano wizard John R. Burr, bassist Garry West, former Grateful Dead sideman Joe Craven on fiddle & mandolin, and either Kenny Malone or Kendrick Freeman on drums, Alison has some amazing talent alongside her. She and her husband, Garry West, also run one of my favourite record labels, Compass Records, out of Nashville. Take a look at their website and you'll find familiar names like Shooglenifty, Kate Rusby, and the entire Green Linnet catalogue!

Alison Brown achieved an international reputation as a banjo player by pushing the instrument out of its familiar Appalachian settings and into new musical territory. Through four albums on the renowned Vanguard Records label and one on her own Compass Records, Brown composed and played her way into the affections of fans of jazz-hued acoustic music with a unique voice on a relatively unexplored instrument. Many bluegrass fans are aware that Brown's first marks on the national scene came when she was asked by Alison Krauss to join her band Union Station in 1989. Fewer are aware that Brown honed her chops as a teenager in Southern California with some of the best pickers and singers to emerge in the subsequent decades. She met fiddler Stuart Duncan as a 12-year-old. They performed extensively together and sometimes sat in with country superstar Vince Gill and Gene Libbea, now bass player with the Nashville Bluegrass Band. In the summer of 1978, she traveled the country with Duncan and his father, playing festivals and contests. A first place finish at the Canadian National Banjo Championship helped her land a one-night gig at the Grand Ole Opry.

Brown's journey to a professional music career then took a detour. She attended Harvard, studying history and literature, then UCLA, where she secured an MBA. That led to two years with the public finance division of Smith Barney in San Francisco. Then she joined Krauss for a successful three-year run that included a place on Krauss' Grammy-winning I've Got That Old Feeling album, as well as bluegrass music's highest accolade for an instrumentalist: the International Bluegrass Music Association Banjo Player of the Year in 1991.

"Alison Brown left a career in investment banking for a life as a banjo musician. Anyone who thinks this was a foolish move hasn't heard her play." — New Yorker

Stolen Moments (2006) is her 4th Compass release and she launched a limited edition seasonal album, Evergreen, at the end of 2007. Surprisingly few Canadian festivals have booked her over the years. This is absolute madness! This band is so hot! Don't miss their return engagement at the Cap Folk & Roots series!