1Sunday Swing Dance: with an all-star band and some swing dance lessons.
Free with a Sunday Ticket or Weekend Pass, $10 without (buy at the door).

Read
Gypsy, The life of Django Reinhardt
A great article about Django appearing in the New Yorker. 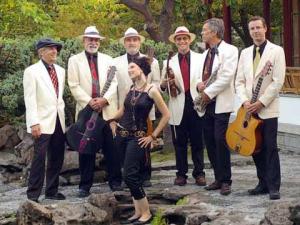 In what could become a Rogue Folk tradition, the First Annual Vancouver Django Festival kicks off with some great workshops, excellent food, some jamming, some dancing, and four of the hottest bands around. Celebrate the musical legacy of Django Reinhardt with Van Django, Hot Club of Mars, Marc Atkinson Trio & Lache Cercel's Roma Swing Ensemble. There will also be a French "bistro", serving wine, bread, cheese, truffles, etc. 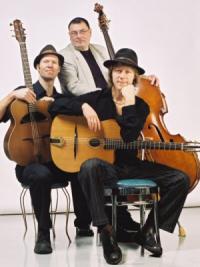 When I was about 12 years old my Dad bought our first stereo system. It was a huge sideboard with a drop down door for a turntable and a valve radio alongside it. There were enormous speaker cabinets underneath. The turntable had two different cartridges - one for 45s and 33s and one for 78s!

Shortly thereafter Dad bought two jazz LPs from Woolworths: Djangology by Django Reinhardt and Hamp by Lionel Hampton. They cost 12/6d each and were on a budget label called Music For Pleasure. They were the only records we had for at least a year. It got to the point where those tunes would pound around in my head every day at school. I can still remember every note!

So over 4 decades later I managed to find 8 of the 10 Django tracks on emusic.com. I finally found a cassette recording of those LPs a few weeks ago. The Django LP remains a personal favourite, so I have been consistently delighted to find excellent bands in Vancouver and Victoria playing Django's music. More importantly, they are taking the music and doing wonderful things with it, while keeping the style true to its roots in manouche, the music of the rom / gypsy musicians who have roamed Europe for hundreds of years. 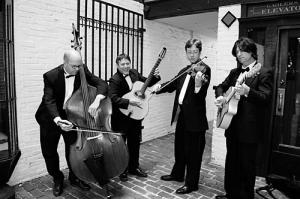 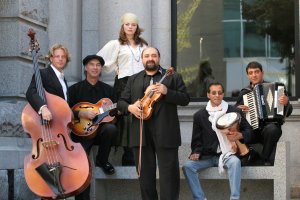 When Van Django launched their debut CD last December I broached the subject of staging a Django Festival in Vancouver. Van Django were definitely up for it. Next stop was Michael Dunn and The Hot Club Of Mars. If anything, they were even more keen! Michael suggested I approach Marc Atkinson of The Bills. I checked the touring schedules of The Bills and Marc's Trio and then sent him an email. The immediate reply was also positive. I mentioned the amazing Romanian fiddler Lache Cercel (pronounced Locky Churchill!) as the fourth band to anchor the festival. Lache released a superb CD last year with his Roma Swing Ensemble - Muzika Konkordo - on Jericho Beach Records. So now we have April In Paris - thank you, Mark Dowding of The Hot Club, for the name of the event. It runs on Saturday and Sunday April 21st and 22nd at St. James Hall. There will be a concert each night, plus workshops and a dance on Sunday. We plan to have a French Cafe on Sunday, and jam sessions each night. I just can't wait!

The Hot Club of Mars is a direct descendant of The Kitsilano Kat Kickers, one of the first groups to play hot swing around Vancouver in the late 70s. Their musical scope has widened a little bit since then, but they still serve up some of the best Gypsy Jazz in town. The Hot Club is made up of: the lovely and talented chanteuse, Jennifer Layne, bassist Charlie Knowles, rhythm guitarist Steve "Bugzy" Szabo, Michael Dunn and Don Kellett on lead guitars, resident windgod Mark Dowding and, the newest import, violinist Tom Neville. Chanteuse Deanna Knight, who took time off last year to produce a little Mars Rover, will be joining them on a number of tunes as well.

The Marc Atkinson Trio is a virtuosic, acoustic guitar-driven trio from Victoria. The band features Chris Frye of The Bills on rhythm guitar, Joey Smith on bass and, you guessed it, Marc Atkinson (also of The Bills) on acoustic lead guitar. Their 2002 CD Marc Atkinson Trio II, was voted one of the year's Top 5 CDs released in North America by Acoustic Guitar Magazine - it was also nominated for best jazz album by the 2003 Western Canadian Music Awards. The tunes showcase that elegant gypsy guitar style and, in true West Coast style, infuse it with a catchy blend of influences ranging from folk to jazz to classical to world beat.

Before leaving his homeland, Lache Cercel was one of Romania's premier musicians and a recognized prodigy and virtuoso. His music is firmly rooted in Roma tradition and you can hear and feel the tragedy, history, struggle and spirit that make that music what it is. Mix it with jazz and glorious improvisations and you've got a performance you are unlikely to forget. Lache and his Roma Swing Ensemble represent the latest chapter in an important movement in Canadian World Music: elite musicians from around the world who settle in Canada and create music that incorporates their own musical traditions with the influences they find surrounding them.

Van Django made a thoroughly entertaining appearance at the Rogue at the end of last year. The band is made up of four extremely talented and eclectic musicians: Cameron Wilson on violin, Budge Schachte on guitar, Finn Manniche on guitar/cello and Laurence Mollerup on double bass. The music is unmistakenly Djangoesque, but you can expect a lot of postmodern musical paraphrasing thrown in for good measure (Smoke on the Caravan and I found a new baby in the Hall of the Mountain King spring to mind).