"If there has to be a definition of world music, this is it!" — Andy Kershaw, BBC 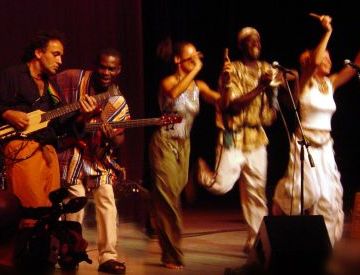 Our first encounter with Baka Beyond was in 1993 at the Pontardawe Festival in South Wales. We'd been attracted by the festival line-up and were keen to see Outback, an acoustic world music fusion band led by English guitarist Martin Cradick. When we arrived we found that they had split up, but there was a new band making its debut. The venue was a cavernous school gymnasium, and the sound was dodgy. What a shame.

A couple of years later we were sat in a cafe in Oceanside, Oregon, listening to some very tasty guitar music on the sound system. "Who is this?" I asked. "Baka Beyond," came the reply. It was their debut CD, Spirit of the Forest. I was hooked. Their CDs became regular features on my radio show after that, and we finally got to see the band again at Victoria's Rootsfest some years later. They were stunning. So much energy, such great Afro-Celtic grooves, scintillating call and response songs, compelling polyrhythmic drums, and a mad French fiddler, too! Paddy Le Mercier used to play in Malicorne, France's equivalent to Fairport (making him a sort of French Swarbrick, i guess).

We've seen them a couple of times since - at the Croatian Cultural Centre 3 years ago, and then at the Edmonton Folk Festival last year - where they were absolutely wonderful, both in their own concert and in a collaborative workshop with Le Vent Du Nord which set new standards for Afro-AngloFrench (musical) relations.

Baka Beyond was founded when Martin Cradick and Su Hart visited the Baka Pygmies of the Cameroon rainforests after seeing a TV documentary. So inspired were they by their magical rhythms and melodies that they recorded Spirit of the Forest. This CD pushed them into worldwide recognition. In order to make sure that the Baka got their fair return for their compositions Martin & Su founded the charity, "Global Music Exchange"

Since these early beginnings when the term "world music" barely existed, Baka Beyond has evolved into a multicultural, dynamic live stage show with album sales in excess of a quarter of a million copies. Band members hail from Brittany, Cameroon, Senegal, Sierra Leone and Ghana as well as Britain. Each musician brings their own influence and talent to the music creating a unique spectacle and honouring a lesson learned from the Baka people, "everyone to be listened to."

They have released seven CDs to date, with the latest, Baka Live, recorded in the UK with touring Baka musicians, Gbine. The CDs are all good, but I still find myself drawn back to the opening few tracks of 1998s Journey Between.

Sometimes fusions of musical styles don't quite satisfy the demands of devotees to one style or the other - and it just doesn't quite work. Baka Beyond possesses the rare ability to provide a feast of Celtic music, infuse it with some remarkably appealing African rhythms, and come up with a heady mix that has everyone smiling and, ". . . if you are not dancing, maybe you should have someone check your pulse."