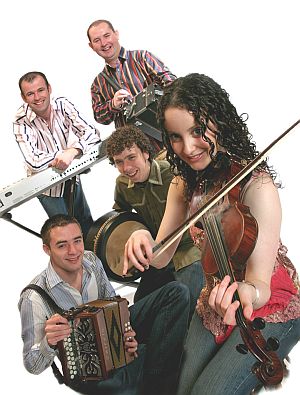 "Madcap genius! Beoga's music has the authority of master craftsmen; unafraid to take chances and walk on traditional music's wild side. They are injecting raw adrenaline into the tradition. In Niamh Dunne they have a formidable vocal talent." — Irish Music Magazine

Beoga (Irish word for 'lively') are a five-piece traditional band based in County Antrim, Ireland. The band was drawn together after 'jamming' in a ferocious music session at the All-Ireland Fleadh in 2002. Their unique sound features the twin duelling accordions of Seán Óg Graham and Damian McKee, along with four times All-Ireland bodhrán champion Eamon Murray and pianist Liam Bradley. In 2005, Beoga were nominated by Irish Music Magazine for the best traditional newcomer's award. With the addition of one of Ireland's premier young singers, Niamh Dunne - who is also a fine fiddler, Beoga are confirming their reputation as one of the most exciting acts to emerge from Ireland in recent years.

The bedrock of Beoga's music lies firmly within the Irish tradition, but they are not afraid to incorporate other genres' nuances into their music. From bluesy riffs to Astor Piazzola-style jazz, to a raunchy New Orleans jamboree vibe, their music always returns to a wonderfully bouncy traditional sound. With a repertoire of fresh, self-penned tunes and inventive arrangements, their debut album 'a lovely madness' earned 9/10 in Ireland's Hot Press music magazine and was one of the Top Trad/Folk Albums of the year.

"A stunning band. Super vocals, a terrific staccato beat to the rhythm with a real sense of style and wit. This is a major, major band to be reckoned with.... Power and nuance, humor, talent aplenty. Get ready for a long run for Beoga." — Chicago Irish-American News

The group's 2007 release Mischief also received excellent reviews across the board, including a phenomenal 9.5/10 rating from Hot Press. Amongst the surprises on it are a swinging version of "Please Don't Talk About Me When i'm Gone" and several collaborations with the Prague Symphony Orchestra!

This will be their first gig in western Canada, and it's a bit of a gamble for us. They are really brilliant, so please come along and make them feel welcome.