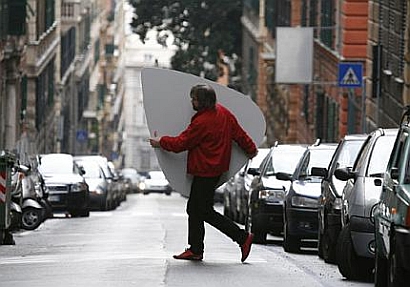 On the road with mama

"He's an almost unnaturally gifted flatpicker and fingerstylist, and he's personable to a fault - a charmer who has even the most reticent audience in the palm of his hand in short order." — Taylor Guitars

Beppe Gambetta is a virtuosic guitar player and an emotional singer who manages to effortlessly bridge bluegrass, Eastern European folk music, Celtic rhythms and the music of his native Italy. He is a remarkable musician who has almost singlehandedly popularized flatpicking throughout Europe, while forging his own unique approach to the guitar along the way.

A native of Genoa, Beppe has become one of Europe's foremost guitarists in American idioms. When he was eleven, he heard a guitar strummed by some amateur singers on a train and immediately wanted to devote his life to that beautiful sound. He began by playing in a classical orchestra for plectrum instruments, and when he heard the music of Doc Watson on an LP that a friend brought to Genoa, he decided that flatpicking was the most beautiful way of playing the acoustic guitar. He moved to American music when he founded the Italian bluegrass band Red Wine. The band released Full Taste but Gambetta began to concentrate on a solo career in 1988, when he recorded Dialogs with portable digital equipment while on the road in the US. He has collaborated with Tony Trischka on Alone Together, and in 2003, he teamed up with some of the world's best (Tony McManus, Don Ross and Dan Crary) to record and tour as Men Of Steel.

His latest CD Slade Stomp, was recorded in 2006 and dedicated to "all the 'picking masters' who influenced [his] style". It is recorded without accompaniment, and all the "duets" and "quartets" are multiple layers of Gambetta.

"Few players on the planet could so successfully fuse an unwavering allegiance to tradition with impatient, wideeyed vision, tongue-in-cheek humour with solemn devotion, and folksy song styles with progressive improvisation, as Gambetta has done on Slade Stomp... for those who appreciate a sense of adventure in even the most antiquated music." — John D'Agostino

Gambetta's playing and singing stand out for their intimate emotions, communication, sobriety and humour. Music that modestly avoids relying solely on his high level of technical excellence, but also reveals the innermost feelings of a brilliant, playful mind that is always firmly exploring and innovating while staying firmly rooted in tradition.