Shari Ulrich, Rick Scott and Joe Mock first teamed up in the 1970s and virtually created the independent recording scene in B.C. The legendary stringband employs soaring harmonies, wacky humour, and some shimmering picking. It's a banner month for birthdays: the Pumkin are celebrating their 35th anniversary, the 30th year of the Children's Festival, the 20th year of the Rogue Folk Club, and the 10th year of the Saltspring folk club! 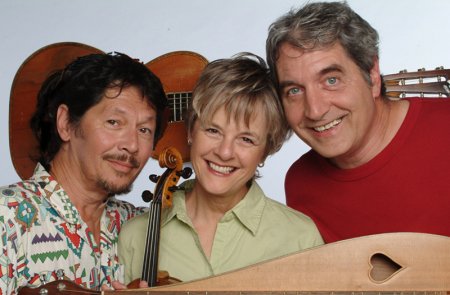 Over the past 22 years of presenting "The Edge On Folk" I have come across quite a few bands that have a style that seems to be unique to Vancouver and the West Coast. There are strong traditional roots in the music, the instrumentation is mostly acoustic, the vocals feature exemplary harmonies, and there is a definite wackiness running through the songs and tunes. Prime examples would be Spirit of the West, Nyetz, The Paperboys, Mad Pudding, Zubot & Dawson, and The Bills. There have been plenty more such bands, of course, these are just a few of my own personal favourites.

The band that defined this style was active long before I reached these shores in 1981 - Pied Pumkin. B.C.'s most lovable string band of the 1970s began their trail-blazing antics back in 1973, and soon became the darlings of the college circuit and the burgeoning folk festival scene. Their stage shows were renowned for off-the-cuff craziness, gorgeous harmonies, and intricate, swinging, rhythmic tunes that filled the dance floor with happy gyrating bodies. At the same time, Pied Pumkin blazed the trail for independent record production and sales - selling over 30,000 LPs from the stage between 1973 and 1976 when Shari Ulrich left to join Valdy's Hometown Band. But I'm getting ahead of myself here.

Pied Pumkin: the lotus eaters blues band, the lost soul singers of the rain forest, mushroom madrigal mayhem with strings. Their amalgamation was a little improbable, perhaps, but as American novelist Anne Nietzche says, "North America is tilted to the west, and all the loose stuff ends up on the coast!" Rick Scott, the tall handsome Texan, former Military Policeman, he of the gurning - that's face contortions, by the way - and "electric snowshoe" fame - that's a supercharged mountain dulcimer, teamed up with California blonde multi-instrumentalist Shari Ulrich and Vancouver's mercurial guitarist Joe Mock right here in Lotusland. They inspired a generation to make another generation of folkies, who are now procreating another. And so on, and so on. All this from a tiny pumpkin seed sown in 1973.

Somewhere along the way the spelling changed, but the energy never wavered. Not even when Shari left and Rick and Joe went on as Pied Pear and then Joe drifted across the Pacific Ocean to live in Tokyo while Shari left Valdy behind and started a successful solo career, and Rick became one of Canada's most popular children's entertainers and learned tightrope walking - and elephant riding in Thailand!

The magic was clearly still there when the Pumkin reunited 10 years after the demise of the Pear in 1988 with a new tape of unreleased material - the marvellous "Lost Squash Tapes" and wowed audiences across the West with a stunning tour of concert halls and folk festivals. They had so much fun they decided to repeat the process whenever possible. A retrospective CD was released in 1998 - "Plucking DeVine", followed by a live CD of old and new songs - "Pied Alive" in 2000. Now they have a brand new collection of "tuneful tales for kids & kin" - "Pumkids" - to mark the 30th anniversary of the Vancouver Childrens Festival.

Rick plays all those dulcimers and sings and tells stories and pulls faces and chortles away in his fetchingly rough-hewn voice, perfectly complemented by the soaring angelic vocals, fiddle, mandolin, flute, piano and dulcimer of Miz Shari. And Joe Mock adds his trademark rambling guitar solos, strident piano, and touching songs to the mix. The three voices combine to sublime harmonic effect, and the dance floor fills up with three generations of whirling revellers. Don't miss the return of the Great Pumkin at the St. James Hall, and hear the West Coast Sound - Canadian style, as performed by its founders. It's the perfect way to celebrate the Rogue's 20th Birthday!