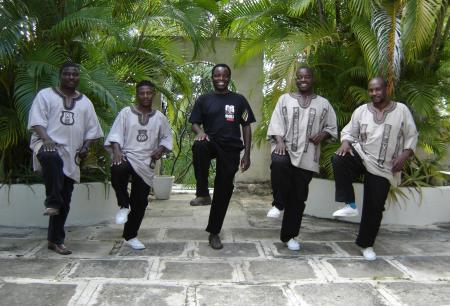 "There is no doubt that anyone interested in the shimmering vocal harmonies and compulsive rhythms which characterize Southern African vocal harmony groups, will be mesmerized by Black Umfolosi" — Sydney Morning Herald, Australia

One of the Zimbabwe's most powerful and exuberant acts on the current world music scene, Black Umfolosi are a dance singing sensation. A potent mix of traditional Zulu war dances and haunting "imbube" songs from southern Africa, their dances are performed with energetic frenzy and their a capella songs with serene beauty. Their repertoire includes songs of celebration, comic songs, hymns and love songs, either taken from the Ndebele tradition or composed by the group themselves. This is a marvelous blend of rhythm and harmony that is just bursting with energy.

The members grew up together at school in the 1980's, and started singing as a pastime; a way to entertain themselves. Starting with 6 core members, they now are a large group who travel all over the world wowing audiences with their amazing a capella harmonies and traditional African dances.