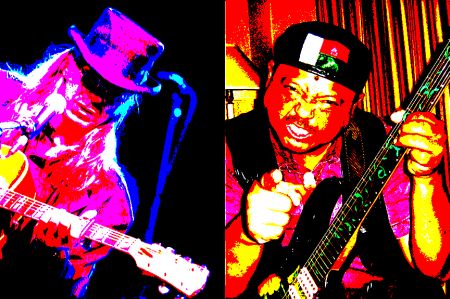 With 12 Juno Award Nominations and 6 Juno Award Wins between the two, and a deep 10 year friendship that seems to keep on growing, together Bill Bourne and Madagascar Slim are a highly creative professional force that loves to rock out as much as they love to paint beautiful musical pictures with their free and fluid interpretations of songs.

The blues has a prominent position in the music, but their influences stretch from the Arctic to the Antarctic, from such diverse regions as Madagascar, Mongolia, Spain, Nashville, Piedmont, The Caribbean, and Canada.

Together, Bill and Slim have created a new recording that includes the mystical strains of Malagasy Salegy in 'Sangisangi' through to the Steve Earl-esque 'Blue Eyed Moggie', which features Bill playing the Ektar and Slim's uncontested screaming blues rock guitar style. The spooky 'Spike Island Raga' features Bill on electric slide and scat vocal, while Slim's beautiful nylon string guitar touch floats effortlessly around the recording; an example is the hair-raising nylon guitar in the Malagasy song 'Fankahalana'.