Virtuosic harmonica driven (50/50 mix of vocal and instrumental)
blues/world roots/jazz music that is as eclectic as it is bluesy. 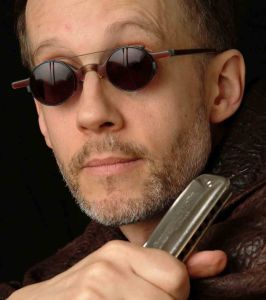 Carlos is no stranger to Vancouver's wildly popular home of the blues, The Yale Hotel. A few years back he played at Capilano Performing Arts Theatre - affording him a rare chance to present his music in a more reverential listening environment. When he asked to try a similar experience again, we had no hesitation in inviting him into our cosy intimate haven of real, live, music - St. James Hall. How can we begin to describe this music, you ask? Well, how about: Virtuosic harmonica driven blues / world roots / jazz music (a 50/50 mix of vocal and instrumental) that is as eclectic as it is bluesy.

Playing a ten hole diatonic harmonica, Carlos has developed the unique ability to play chromatically by using a recently developed "overblow" technique taught to him by jazz virtuoso Howard Levy. Overall, this approach to the diatonic harmonica, although much more difficult to achieve, is in many ways more expressive and communicative than the mechanized tone produced by the chromatic harmonica . Carlos is one of the few pioneers of this overblow method, bringing musical credibility to what has still been considered by many in the music industry - a fringe folk instrument. The sophisticated sound produced by del Junco is at once sensitive, soulful, and sexy while never forgetting the rawness inherent in blues music.

Del Junco continues to produce an eclectic palette of music on Steady Movin', his (2008) 5th recording in a band setting and his second CD for Northern Blues - following the excellent Blues Mongrel (2005). It features a mostly acoustic set with 3 solo showcases of Carlos harmonica wizardry.

The band was in scorchingly hot form in Memphis last month, and features Carlos del Junco: harmonica & vocals, Henry Heillig: bass, Eric St. Laurent: guitars, Jordan John: drums. Carlos assured me that they love playing quiet, "listening" rooms too. (In keeping with most of our performers - you'll get variety!)

Be prepared to be amazed. The stigma of the harmonica as a "fringe folk instrument" will quickly disappear once you hear this electrifying quartet.