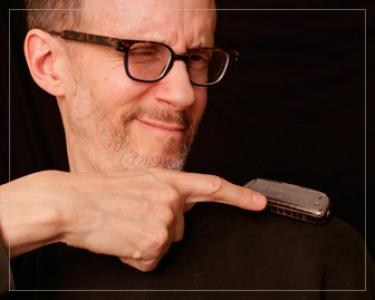 It's probably a good thing Carlos wasn't there when the harmonica appeared in North America in the 1860s. Neil Young and Bob Dylan can probably roll with it when he says they are very mediocre harmonica players. Aspiring harp players Wyatt Earp and Billy the Kid might have overreacted and pulled out their pistols...

To say he plays the harmonica is like saying "Jimi Hendrix plays guitar". He blows the blues harp through a prism -- suddenly it seems he's holding every color in the musical rainbow right there in his hands. Simultaneously sophisticated and raw, his playing blurs the boundaries between blues and jazz (hence the name for his band "The Blues Mongrels"). The emphasis is on blues, but Carlos and his band are not afraid to merrily traipse off in other directions delivering a seamless fusion of New Orleans second line grooves, swing, Latin, hip-hop or ska melodies, to swampy roots rock.