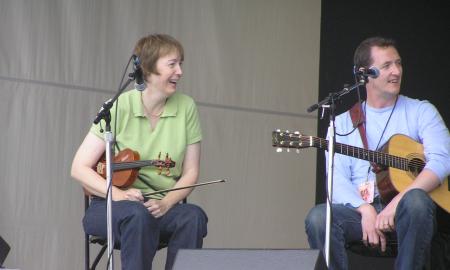 Before Liz Carroll and John Doyle, Irish music in America struggled to compete with the music of the Old World. With a new generation of creative powerhouses living in the United States, however, the tables have turned, and with John and Liz at the forefront, the US has become a place for vibrant, forward-thinking Irish music.

Both fiddler Carroll and guitarist Doyle began their careers young, recognized as instrumental virtuosos. Carroll won the Senior All-Ireland Championship at age 18, not a small feat for an American. While Carroll traveled eastward across the Atlantic, Doyle moved westward, relocating from his family home in Dublin to New York. Introduced to Irish music by his grandfather Tommy, Doyle was playing professionally by age 16, and soon joined an energetic collection of New-York based Irish musicians, including Eileen Ivers and Seamus Egan.

Irish musicians learn traditional jigs and reels by playing them in 'sessions'. These jam-like gatherings, at parties and in pubs, have their own very particular etiquette. For instance, apprentice bodhran drummers generally aren't welcome because loud rhythmic lapses screw things up for everyone else – the legendary piper Seamus Ennis' once quipped that the best way to play the frame-drum is "with a knife". Another unspoken rule is that you don't introduce your original tunes into the session, as no one else can play along.

So for years Liz Carroll's prodigious talent as a writer of new traditional tunes went largely unknown. The Chicago-born fiddler has forged compositions in the Irish mould since her early childhood, but only her family got to hear them. She certainly didn't play any when, in 1974 and '75, she won the coveted all-Ireland title at both junior and senior levels – only the second Irish-American fiddler to do so.

"I've always written because I love to, and because there never seemed to be enough tunes around and I wanted to create little challenges for my fingers and my ears," says Carroll, on the line from her Windy City home. "The first person in Chicago I could really show them to was Jimmy Keane, the piano-accordion player. I could say 'Hey, I made this up' and he'd play it. The tricky thing about Irish sessions is that everybody wants to play. That's the reason I learned every damn tune I could hear. You didn't want to be left out."

So these days Carroll is happy to be making albums and getting her original compositions in circulation. Tunes like the achingly soulful slip jig "For the Love of Music", and the wild-swinging reel "The Potato On The Door" from 2002's Lake Effect are surely destined to become favourites at Irish sessions from Sydney to Sligo.

"When I was really young my tunes didn't sound like anything that would get played. Then they got nicer, and then they got complicated because it was all about getting around the instrument - more about difficulty than melody. Later on they're all about melody, and they don't have to be difficult."

In recent years Carroll has found the perfect musical partner for her spirited new Irish music in John Doyle, who for many years played with the band Solas. The Dublin-born guitarist is a brilliant accompanist, combining harmonic richness and dazzling agility and speed. He also co-arranges the tunes on In Play, Carroll and Doyle's first release as a duo, featuring 23 original tunes by Carroll.

"I have my own idea of what I want the chords to be. But when John starts playing and putting in his ideas the tune gets better – a lot better. Being fast also means he gets things fast. He really understands those gutsy kind of tunes that are about 'let's dig in here'. And if you do something new with a tune, if you change something, he'll pick up on it right away and throw it back at you with a laugh the next time it's played through."