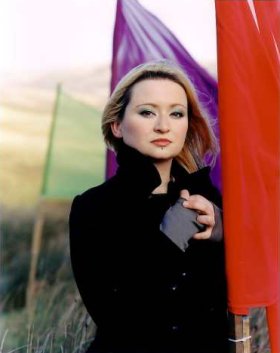 Eliza Carthy, the worthy off spring of British folk icons Martin Carthy and Norma Waterson, is celebrated at home as both a traditional singer-violinist and a folk innovator. Her powerful alto voice is as pure as rainwater and bracing as the sea air. She has released several solo CDs and plenty more with Waterson: Carthy. She is equally at home singing a poignant traditional song, rocking out on some tortuos English 3/2 hornpipes, or crooning a very catchy original song with ultra-modern backing. She was 13 when she first came to Vancouver as a "Waterdaughter". Upon seeing Rory McLeod she decided that she wanted a career in music! It's been quite the illustrious career, too, over the last two decades. She's worked with Billy Bragg and Roger McGuinn amongst others and the latest project includes her band The Ratcatchers and a new duo with her partner, Canadian guitarist/singer Aidan Curran, from Victoria. Look for a new Eliza Carthy album of original material, Dreams of Breathing Underwater, in September.