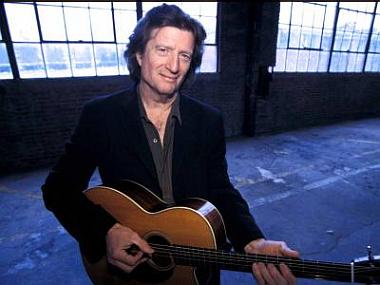 This New Orleans native is one of the finest voices in acoustic blues. His foot tapping style is reminiscent of John Lee Hooker, but make no mistake Chris Smither is an original. Many have covered his tunes including Emmy Lou Harris and Bonnie Rait, but it is best to catch Chris performing them with his witty repartee, his great guitar picking, and wonderful soulful singing, not to mention some of the best tunes you'll ever hear.

"Through the decades, Mr. Smither has taken the blues in a direction entirely his own: stoic existential ruminations sung in a pained, weathered moan and set to quietly virtuosic guitar. There was always unpretentious philosophy in the deep blues, and Mr. Smither has followed it toward his own quiet epiphanies." — New York Times

"Smither's roots are as blue as they come. There is plenty of misty Louisiana and Lightnin' Hopkins in Smither's weathered singing and unhurried picking. So fine." — Rolling Stone

"He taps his foot to keep the rhythm, much like the late blues legend John Lee Hooker. His finger-picked guitar lines are sleek, unhurried and insistent. And then there's the voice -- equal parts gravel and molasses, Smither's singing sounds like a distillation of the folk and blues heroes he grew up listening to in New Orleans." — National Public Radio

I like Chris Smither. There's something about his music: the combination of smooth guitar, bluesy songs and clever word play. Maybe it was the time that he came out to CiTR and played live on my show. That would have been around 1995, I think. I've never had so many calls as I received that morning. So, I became a fan in the mid 1990s. Chris had already been making music for three decades and more. Then there was a time – 1997 – when we brought him to St. James Hall and there were only pews to sit in. The place was packed!

The following year I saw him at BB King's on Beale Street in Memphis, and the next year it was Albuquerque, where Ian Anderson of UK magazine fRoots conducted an interview / mini-concert with Chris during the Folk Alliance conference. That year Chris released Drive You Home, with that great song about the fruit-barrow salesman in New Orleans – No Love Today – and we brought him to the WISE Hall where, for the first time, he met Roley Sally, the guy who wrote Killin' The Blues, a staple of Chris' concert sets for many years now. That was another full house, of course. A few years ago Chris drove up from Seattle on Super Bowl Sunday while everyone in Vancouver was panicking about the heavy snow, Chris just breezed on through it. We didn't expect him to come at all. For the first time I can recall for a Chris Smither show, there was a small crowd that day. What wimps we are in the snow!

Since then he's played at Cap College a couple of times and he's released a couple of fine CDs, most notably his latest, Leave the Light On, arguably his finest offering to date. Ollabelle, who also play at the Rogue this month, played and sang on two songs: Seems So Real, and John Hardy. Most of the songs on his CDs are originals, often showcasing subtle irony and mischievous word play. Listen to Cave Man, Winsome Smile, Get A Better One, and Origin Of The Species for examples of his glittering lyricism. His choice of covers is exemplary, ranging from stunningly original takes on the Blues of Mississippi John Hurt, Lightnin' Hopkins and Robert Johnson to riveting versions of Bob Dylan's Desolation Row, and Visions of Johanna, and Richie Furay's gorgeous song Kind Woman.

Chris releases a live DVD this month, recorded at two intimate shows in Connecticut and a band concert at Boston's Somerville Theatre. Buying the DVD won't give you the full concert experience, of course, but it would make a lovely souvenir of what will be an outstanding concert!