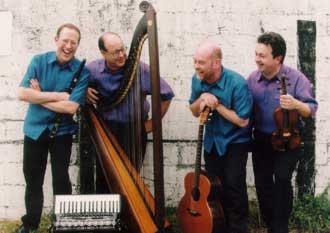 If Wales is known as the Land of Song, the tunes have had to take a back seat until the arrival of Crasdant - the foremost instrumental band of the country. Take four gifted instrumentalists, all with impeccable solo musical credentials, combining out of mutual respect and with a focussed aim of placing the Welsh instrumental canon alongside its Celtic brethren. Crasdant mix the traditional harp of Wales, the unique triple harp, with flutes, fiddle, accordion, guitar and Welsh reed instrument - the pibgorn. Adding a terpsichorean spice to the mix is the flamboyant step-dancing of a champion clogger. Crasdant are Robin Huw Bowen (triple harp), Stephen Rees (fiddle), Andy McLauchlin (flute, pibgorn), and Huw Williams (guitar, clog dance).