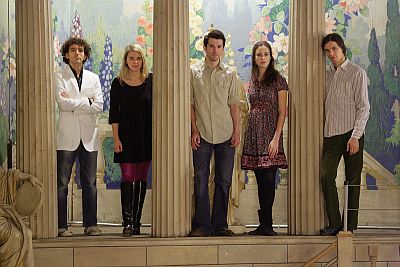 "Who would think that a barebones blend of fiddle, banjo and cello could create such a compelling sound? Crooked Still makes chamber music for the back porch set... Singer Aoife O'Donovan provides seductive, down-home charm... a genuine class act." — Amplifier Magazine

It takes courage to release the security of the familiar and embrace change. After five years of touring and establishing themselves as "the most important folk group to emerge from Boston since the early 60's" (Boston Globe), Crooked Still announced that cellist Rushad Eggleston would leave the group in November of 2007. The solid foundation they built as a group earned them invitations from huge events like the Edmonton Folk Festival and the historic Newport and Telluride Festivals, plus numerous rave reviews from publications like USA Today and Interview Magazine. Crooked Still was now on the cusp of a new musical chapter. Would they fold or expand the lineup and repertoire? The quintet became five with the addition of fiddler Brittany Haas - sister of Natalie Haas, who plays with Alasdair Fraser - and cellist Tristan Clarridge.

"We rehearsed for a few days before we recorded," Clarridge says. "We'd listen to a source recording, strip the songs to the bone and build an arrangement incorporating everyone's ideas. It's fun to see how many directions you can take a song." Everyone brought material for consideration. "As we worked on the songs, we realized there was a lot of loss and mortality in the lyrics," banjo player Greg Liszt adds. "You can't make a folk album without delving into what's happening now and we were surprised at how current the songs sounded. On 'Captain, Captain' a woman asks what happened to her lover and the Captain replies 'he dropped down dead in the gulf.' It's a 400-year-old line, but it gives you chills."

"It's hard to pin down our music," bass player Corey DiMario says. "We play improvised old time music, bluegrass, folk and our own songs within the broad context of a string band. Like a lot of today's bands, we have modern and traditional influences that confuse the boundaries. We want to keep blurring those lines to make something all our own."

Crooked Still made their Vancouver debut at the Rogue in October 2006. Their music showcases the sparkling vocals of Aoife O'Donovan and the fiery banjo of Liszt, who is a stalwart member of the Bruce Springsteen Sessions Band. He missed the Rogue gig last time as he was touring with The Boss. Greg will be here this time, though!

The new line-up has had a few months to gel, and they released the band's 3rd CD - Still Crooked - last month on Signature Sounds. It's another wonderful recording, full of stark imagery, sizzling strings and the sublime voice of Ms. O'Donovan.

This band has excited us since we first heard them, and we are absolutely delighted to be able to bring them back to town.