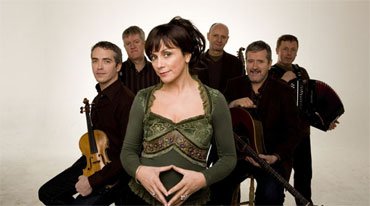 The members of traditional Irish band Dervish met as most Irish musicians do: as strangers in a bar. "I'm a farmer's daughter," says singer Cathy Jordan, "and someone else in the band is an architect's son. Outside of music, we may have never met, but this is how Irish people have forged unlikely friendships for years, playing music together."

"In Irish music, there are three elements: goltraí, so sad it brings tears; geantrí, so lively it makes you want to dance; suantrá, so soothing you want to sleep. At a Dervish concert, you experience all three and it leaves you exhilarated!" proclaims Jordan.

North American audiences will have a chance to be transported during Dervish's Fall 2007 Tour. The Sligo County band's sound is characterized by Jordan's distinctive voice combining with the compelling contrasts of the low-range bouzouki and high-range mandola and their powerful rhythmical backing of accordion and guitar. Fiddles, whistles, flute, bodhrán, and harmonica round the band out for its full effect.