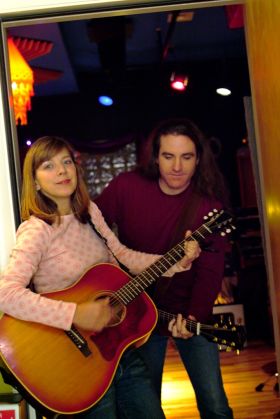 My how time flies! After almost 3 years, Stacey Earle and Mark Stuart are at it again with their new Gearle Records release, "Stacey Earle & Mark Stuart Town Square", which is only available at their concerts. They recorded 32 acoustic versions of songs they have performed over the last 16 years, inspired by the overwhelmingly warm response to the acoustic version bonus CD of their 2003 duo release, "Never Gonna Let You Go". "We are thinking, maybe, it is what the audience wants and we aim to please. Folks come to the show; they ask if we have something that sounded like us that night. Let's call it a souvenir. It seems we have become songwriters, live performers, then recording artists in that order."

While each still remains an individual solo artist with solo releases (such as the new 2008 release of Mark Stuart "Left of Nashville" and Stacey Earle "The Ride" due in 2009), it is through the respect of each others work and years of playing together - and in Stacey's brother Steve's band The Dukes - they have created their own unique sound. A sound that allows each individual to shine through. "We know the economics, it's tough out there. We had to learn how to be the whole twang dang."

A show not to miss, Stacey and Mark reach back and grab songs of the past, then fast forward to the present and into the future. They will be performing songs from their own new solo releases as well.