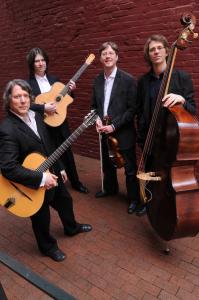 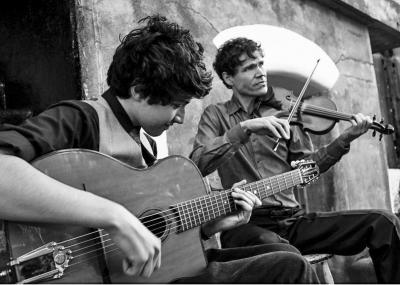 Van Django is an acoustic string ensemble made up of four of Canada's most talented and eclectic musicians; violinist Cameron Wilson, guitarist Budge Schachte, guitarist/cellist Finn Manniche and bassist Brent Gubbels. Van Django's music is punchy, driving and rhythmically inventive, combining a wealth of musical influences while maintaining their roots in the gypsy jazz made famous by the 1930's Quintet of the Hot Club of France. Experience this foursome in an action packed musical universe they call, "acoustic string hot jazz!" They launched their 2nd CD - Waltz In The Shape Of A Tree - at last year's festival, and have since toured extensively in Europe and performed at the prestigious Nanking Jazz Festival in China. Now it's our turn to witness their magic once again!

Brishen's sophisticated yet organic sound reflects the essence of its birthplace - Canada's West Coast. ​Brishen recreates the magic of Django Reinhardt, Stephane Grappelli and the Hot Club de France for an unforgettable musical experience. Be prepared to be wowed with sizzling hot, Gypsy Jazz music performed with incredible virtuosity and soul. ​Brishen is fronted by 17 year old guitarist Quinn Bachand, one of Canada's most exceptional young musicians, and violinist Richard Moody, a veteran of the Canadian folk music scene. Although Quinn and Richard are very active with other projects - Quinn has toured with Ashley MacIsaac and Natalie MacMaster, and Richard is a member of The Bills - they share a passion for Gypsy Jazz. They have teamed up with Reuben Wier on rhythm guitar and vocals, and various bass players - likely Joey Smith this time.