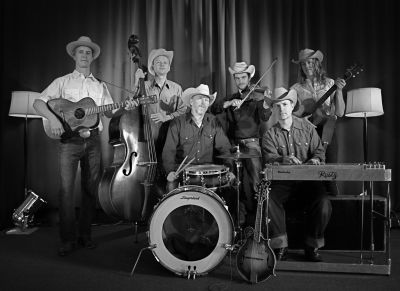 The Caleb Klauder Country Band represents the best of the Northwest music scene. Caleb has been touring nationally and internationally for over 15 years and has been involved with some of the regionʼs most iconic bands, such as Calobo and The Foghorn Stringband.

Today, leading with vocals, guitar, and a mandolin, Caleb hosts some of the northwestʼs best singers and players creating a honky-tonk band that stands out as a totem in the country music scene. The band performs Calebʼs praised original songs right alongside classics from George Jones, The Louvin Brothers and Dolly Parton, all at once sounding timeless, fresh, and alive. There is a drive to his music that makes it unique and captivating. This is country music made for people who want to have fun and who want to dance, harkening back to the old dance hall days when people of all walks of life came together to simply dance, socialize, and enjoy live music.

Raised on Orcas Island, Washington and now living in Portland, Oregon, Caleb is a true north westerner, yet his maternal family roots lay in East Tennessee. His mother, originally from Knoxville, moved her family out west when Caleb was only a year old. These deep family roots contribute to Calebʼs music, tapping into old memories to bring you the strong singing and spirited attitude that give his music an edge that is both cutting and sweet.