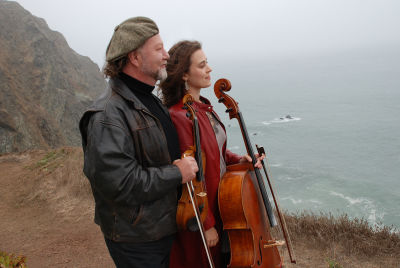 The musical partnership between Alasdair Fraser, long regarded as Scotland’s premier fiddle ambassador, and the sizzlingly-talented young California cellist Natalie Haas may not seem an obvious one. Fraser, acclaimed by the San Francisco Examiner as “the Michael Jordan of Scottish fiddling,” has a concert and recording career spanning 30 years, with a long list of awards, accolades, television credits, and feature performances on top movie soundtracks (Last of the Mohicans, Titanic). Fraser has been sponsored by the British Council to represent Scotland’s music internationally, and received the Scottish Heritage Center Service Award for outstanding contributions to Scottish culture and traditions.

The duo has recorded four albums, their latest Abundance which they will be launching at this show, Highlander's Farewell, In the Moment and their debut CD, Fire and Grace — all on Fraser’s own Culburnie Records label. The CDs display the duo’s dazzling teamwork, driving, dancing rhythms, and their shared passion for improvising on the melody and the groove of Scottish tunes. “Haas is the percussive power to Fraser's fiddle fireworks, providing syncopated, bowed underpinnings to his melodies and solos,” writes Kira Schlechter of The Patriot News.

The duo has performs frequently in Europe, and throughout the US and Canada. They have been featured on NPR’s Performance Today, the Thistle & Shamrock, and Mountain Stage, and represented Scotland at the Smithsonian Museum’s Folklife Festival. In addition, Fraser and Haas have busy teaching schedules, including summer fiddle courses in the US, Scotland, and Spain. Natalie also teaches at the Berklee College of Music in Boston.