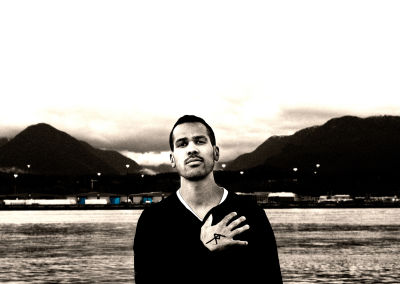 Jason Schneider at Exclaim magazine has said that Craig Cardiff’s new album, Love Is Louder (Than All This Noise), “puts him solidly in the upper echelon of Canadian folk artists.” And Vancouver music fans can find out why Friday, March 6th when Cardiff performs at CBC Studio 700.

Love Is Louder (Than All This Noise) is a double album that offers 21 tracks that ended up being a response to a lot of the notes Cardiff’s fans leave in his Book of Truths. For the past three years, the Arnprior, Ontario-based folk singer has been passing around an empty notebook called the Book of Truths during his shows and asking his fans to share something truthful in it – a story, a confession, a hope, a secret. The book gives fans a chance to write down something they may be too afraid to say out loud, and it gives Cardiff an opportunity to connect with the people who come to hear him play.

Those entries aren’t always easy to read. The stories can be heartbreaking, and they can leave Cardiff wanting to do something, to find the person who wrote about going through a difficult time and tell them to hold on for tomorrow, reassure them that things will be OK. And that sense of reassurance can be heard in Cardiff’s newest collection of songs. “I didn’t realize it at first, but this collection of songs is just really to help people be OK and to let them know to just wait until tomorrow, stay here and push on through,” says Cardiff. “Every song has that kernel of hope and joy, even if it’s not apparent at first. I think the purpose of each song is to remind people to make sure they remember to remember that they’re OK and that things are good. Don’t give up.”

Cardiff worked with producers Ben Leggett (Faraway Neighbours, Ben Hermann) and Andre Wahl (Hawksley Workman, Luke Doucet) to record an album that is quite different than anything he has released before. Love Is Louder (Than All This Noise) is one-part boisterous group sing-along, one-part gentle lullaby. One album features full live band recordings, while the other is more subdued, with acoustic guitar, cello, clarinet and violin.

This is the same team that produced Floods and Fires, the album that earned Cardiff a nomination for a 2012 Juno Award for Roots and Traditional Album of the Year: Solo and a Canadian Folk Music Award nomination as 2012 Contemporary Singer of the Year. This time, Leggett and Wahl told Cardiff they wouldn’t let him make an album like anything he has made before. Cardiff recorded live off the floor with a band for the first time, playing louder and harder than he ever has, and he stepped into a new role, arranging instrumental parts.

Local singer-songwriter Colby Ramsay will be performing an opening set. With an introspective yet universal style, Colby Ramsay writes songs that are one part existential crisis, one part heartache, and one part hope. He sings them in hushed and intimate performances, incorporating folk, soul, and pop sensibilities with a penchant for gratifying melodies.