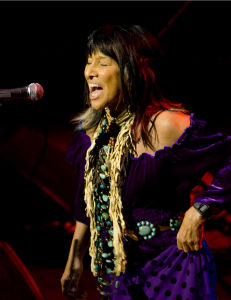 Academy Award winner Buffy Sainte-Marie’s audacious attitude to life on and off the stage has inspired people around the world for over four decades. Not one to rest on her accomplishments, Buffy Sainte-Marie has never stopped channelling her infinite musical and artistic creativity. As one of the most spellbinding artists of our time, Buffy Sainte-Marie gracefully combines a high energy stage presence with cerebral songs that tell powerful stories. This rare and primal blend is a welcome joy to festivals and concert halls around the world.

In the early ‘60s, Buffy Sainte-Marie hit the ground running after the beatniks and before the hippies. All alone she toured North America's colleges, reservations and concert halls, meeting both significant acclaim and huge misperception from audiences and record companies who expected Pocahontas in fringes, and instead were both entertained and educated with their initial dose of Native American reality in the first person. Since her first concert tours, Buffy Sainte-Marie has continued to grow her music in parallel with a remarkably diverse life of esteemed awards, political blacklisting, education, and fun. As one of the most singular artists of our time, she has created 17 albums of her music, three of her own television specials, spent five years on Sesame Street, scored movies, raised a son, earned a Ph.D. in Fine Arts, taught Digital Music as adjunct professor at several colleges and won both a Golden Globe and an Academy Award Oscar for the song, “Up Where We Belong.”

This multifaceted singer-songwriter was oblivious to the genre police whose boundaries were forcibly eradicated when this so-called ‘folk singer’ showed up with songs that would become ingrained in music history. Described as “one of the most successful and versatile songwriters of the last half-century” (The Guardian), Buffy Sainte-Marie’s international hit “Until It's Time for You to Go,” was recorded by Elvis Presley, Bobby Darin, Barbara Streisand and Cher; and “Universal Soldier” became the anthem of the peace movement. Lauded for her stunning live performances, Buffy Sainte-Marie’s concert set list these days includes not only the classics, but also surprises that will win over even diehard fans with its edgy energy, “… whether raising the roof with No No Keshagesh, breaking our hearts with Bury My Heart At Wounded Knee or punching the mic for the rhythm of Relocation Blues, Sainte-Marie herself was magnificent” (Telegraph Journal).

Accompanying Buffy Sainte-Marie on the road is a rocking 3-piece all-Aboriginal band from Indian Reserves in Manitoba, Canada: Leroy Constant (Cree) on bass and vocals, Jesse Green (Lakota/Ojibwe) on guitar, and Mike Bruyere (Ojibwe) on drums and vocals. “They’ve got the energy I need for driving songs like Starwalker and No No Keshagesh and it helps that what I sing about and where a lot of my songs originate is a world they know too: the realities of Native American passion, love, tragedy and music,” impresses Buffy Sainte-Marie.

Buffy Sainte-Marie virtually invented the role of Native American international activist pop star. Her concern for protecting indigenous intellectual property and her distaste for the exploitation of Native American artists and performers have kept her in the forefront of activism in the arts for forty years. Presently she operates the Nihewan Foundation for Native American Education through which the Cradleboard Teaching Project serves children and teachers throughout North America.