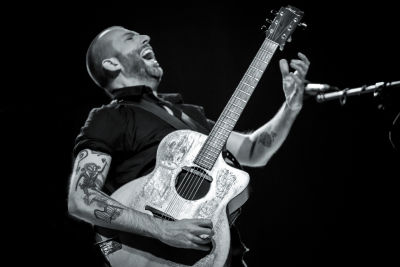 There was always a lot of music around the house. Don’s dad is an operatically-trained singer. So, the Ross kids heard plenty of voice exercises around their Montreal home as well as classical music on the record player growing up (not to mention the occasional blast of the bagpipes when Don’s dad felt like waking up the neighbours with another musical skill he acquired growing up in Scotland!). Don was a very musical child, teaching himself some basic piano skills in his early years. But at the age of eight, when Don’s sister came home from boarding school with an old Stella acoustic guitar, he knew he had met his new best friend. Immediately recognizing the portability and “cool factor” of the guitar, Don and his older brother began teaching themselves tunes by the Beatles, Cream, Led Zeppelin and Black Sabbath.

Based in Leeds, West Yorkshire in the UK, Jon is an acoustic singer-songwriter with a revolutionary virtuoso guitar style, where he uses one acoustic guitar to create drum sounds, basslines and twisting melodies all at the same time. The emphasis is still on the soulful vocals and songwriting, and his original material is influenced by everything from Robert Johnson to Radiohead. His live shows combine deeply personal performances and a natural wit, with a once seen, never forgotten two-handed guitar style, both physical and complex, producing sounds people can barely believe are coming from a humble acoustic guitar. Jon first laid his hands on a guitar at the age of two (actually it was a ukulele – his parents couldn’t find a guitar small enough). He wrote his first song at the age of six, and was soon accompanying his father, a music critic, to gigs in his hometown of Blackpool. Touring musicians would often stay at the Gomm household on the understanding Jon would get a guitar lesson, meaning he had one-to-one instruction from such blues legends as BB King and Jack Bruce of Cream.