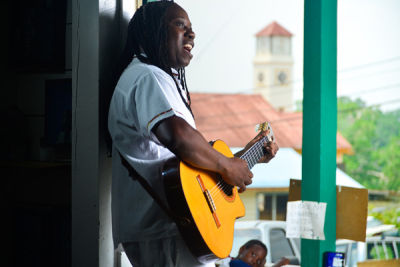 "With his talent,vision, charisma and searing voice, Aurelio is a big part of the reason Garifuna music has achieved outside recognition internationally." ~ NPR

Born in the tiny coastal hamlet of Plaplaya on Honduras' Caribbean coast Aurelio is as much a musician as he is a cultural ambassador for Honduras' coastal Garifuna people. The very origins of the Garifuna lie in a wild, tragic tale of mixing of cultures that hybridized to adapt and survive and along the way, they absorbed French, English, and Spanish terms. A prodigy of percussion, Aurelio began performing at Garifuna ceremonies when just a boy, even at the most sacred events where children were usually not allowed. By the time he left Plaplaya to attend school at 14, he was a respected musician with a firm grounding in Garifuna rhythms, rituals, and songs. Performing in his native tongue, Aurelio's compelling sound is a blend of traditional music fused with Latin rhythms. His journey is marked with thoughtful reflections of the Garifuna past, the sometimes difficult present, and the promising glimmers of the future for artists like Aurelio. "We're not going to let this culture die… few people know about it, but I adore it, and it's something I must share with the world."

Singer-songwriter, guitarist and percussionist, Aurelio Martinez, is one of Central America’s most gifted performers. Born in Honduras, Aurelio is known for his powerful and evocative voice. He is a major tradition-bearer of the Garifuna culture that draws from its African and Caribbean Indian roots. The original home of the Garifuna people is St. Vincent in the West Indies, from which they were deported in 1796 by the British government. They landed on Roatán Island, situated in the Bay of Honduras and later migrated to the neighboring main lands of Central America.

Aurelio grew up in a small Caribbean village called Plaplaya, surrounded by a family of talented musicians. He learned his chords from his father, a well-known local troubadour who improvised playful paranda songs embracing Garifuna roots, rhythms and Latin sounds. Following the influence of his uncles and grandfather, he became a brilliant drummer in his early childhood. He learned to sing from his vocally gifted mother and picked up many of the songs she crafted.

In 1997, Aurelio met fellow musician Andy Palacio of Belize. The two artists struck up a close friendship in part to their shared hopes for the future of Garifuna music and culture. Through Palacio, Aurelio met Ivan Duran, the tireless producer behind Belize’s Stonetree Records. In 2004, Aurelio released his first solo album called Garifuna Soul (Stonetree Records, 2004), backed by some of Belize and Honduras’ best studio musicians who improvised adeptly on Garifuna percussion, saxophone, electric and bass guitars. Undoubtedly, the artist takes the music into the future without compromising the cultural foundations of his inspiration. Aurelio’s richly resonant voice and soulful acoustic songs caught the attention of the global music press and put Aurelio on the map as a tradition-bearer with an innate musicality and subtle innovative streak. Indeed, Afropop Worldwide named him “Newcomer of the year.”

In 2007, Aurelio participated in the album Watina (Cumbancha/Stonetree Records, 2007) featuring Andy Palacio and The Garifuna Collective who received the prestigious WOMEX Award, a respected honor from the world music industry. Additionally, Watina was declared the Greatest World Music Album of All Time by Amazon.com in 2010. By 2008, Aurelio was selected by the Afropop legend Youssou N’Dour, to collaborate as his protégé through the Rolex Mentor and Protégé Arts Initiative. This connection allowed Aurelio to open up for fellow African musicians. This opportunity was a principle step in the artist’s career as it presented him new ideas about technical features regarding his music as well as an exciting possibility to share the stage with Youssou N’Dour in places such as Senegal, New York (Nokia Theater) and Vienna (Vienna Jazz Festival). At the end of this journey, Aurelio’s dream to travel to the African continent finally came true.

In 2011, as a result of his Youssou N’Dour collaboration, Aurelio released his second album Laru Beya (Real World Records SUBPOP, 2011), a compilation of soulful songs linking back to African roots. N’Dour added his stirring vocals to two of the songs, while elsewhere there is backing from those great veterans of the Afro-Cuban scene such as Orchestra Baobab, and Senegalese rapper Sen Kumpé. Aside from honoring his deceased friend and musician Andy Palacio, Laru Beya’s missions centered on uplifting and expanding Garifuna music worldwide. Laru Beya placed sixth in the Top 20 World Music Albums of 2011 according to WorldMusic.co.uk. “Aurelio is a highly talented musician, conscious composer and passionate performer with an excellent band behind him, as well as being the prime advocate for a unique culture. If anyone is going to put the Garifuna culture onto the map, it is Aurelio Martinez” wrote the WorldMusic.co.uk site.

After his debut in the African scene, Aurelio made a return to his musical roots with his third album Lándini (Real World – Stonetree Records, 2014), featuring as its main theme, a traditional Garifuna community way of life. The album draws a gentle picture in which paranda music takes place back in his hometown. Traditionally, after a long day of fishing, villagers return into their boats to the river landing, gathering to hear paranda, the guitar-driven music of Garifuna troubadours who teased and taught, bemoaned and praised community life. Aurelio said, “I consider this album to be the sound of my Garifuna people. On the previous album [Laru Beya] we experimented and collaborated with other artists to reconnect what was lost between Africa and America. This album is purely Garifuna, and the entire spirit of the music reflects the Garifuna experience. My mother is the sole inspiration for this album. She sees herself reflected in me, to a large degree because I’m the only one of the family who could fulfill her dream of singing professionally. She’s the best example I have in my life of what a human being should be, my main consultant and confidante.”