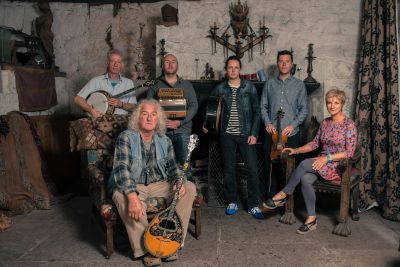 De Danann were formed in 1975 in Galway and became one of the most influential bands in traditional Irish music before going their separate ways in 2003. The group released their debut album ‘De Danann’ in 1975 and in total have recorded 14 albums including ‘Anthem’, ‘Star Spangled Molly’ and ‘A Jacket of Batteries’, achieving chart success, with many of the albums reaching gold and platinum status.

Famous for their cross cultural experiments they recorded Irish versions of The Beatles ‘Hey Jude’, Handel's ‘The Arrival of The Queen of Sheba’ which they called ‘The Arrival of The Queen of Sheba to Galway’. They also recorded Jewish Klezmer music with Andy Statman and made an album called ‘Half Set in Harlem’ featuring American Gospel singing. Their distinctive approach to the tradition both musically and vocally has been the cornerstone of Irish music for over two decades and is also evident on their latest album 'WonderWaltz'.

On ‘WonderWaltz’ De Danann succeed yet again in reaching a standard of excellence. The album captures the current climate of 'recession and depression' expressed succinctly in ‘Hard Station’, but offering hope in ‘Ireland’. We’re reminded of our true riches in the haunting melody of ‘Inis Oirr’ and all are woven beautifully together by the jigs and reels played skillfully by the musicians that are De Danann.

‘WonderWaltz’ harks back to 1979-1980 when albums like ‘Selected Jigs and Reels’ and ‘The Mist Covered Mountain’ sparkled with vibrant instrumental fireworks. Accordion, fiddle, banjo and bouzouki lead the way accompanied by propulsive bodhrán rhythms creating music rich in character and spirit. ‘Master Crowley's’, ‘Apples in Winter’ and ‘Flax in Bloom’ lay waste any thoughts of irrelevance, it's like they never left the building.”