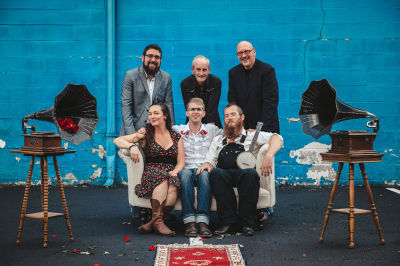 Like an old-time barn dance in downtown New Orleans, the Bumper Jacksons pull together a vast array of early American traditions into a deliciously cohesive sound that strikes you right in the heart.  It’s a sound that’s pure passion…. joyous ragtime dances and roadhouse drinking songs are valleyed by delicate waltzes of loss and regret. They will be making their second trip across their northern border to perform at the Rogue Folk Club.

The Bumper Jacksons started out humbly in 2012 as a country-meets-city duet between Jess Eliot Myhre (clarinet, vocals, washboard) and Chris Ousley (guitar, vocals, banjo) in the backyards, living rooms and front porches of DC and Baltimore, MD. They soon ventured out and honed their chops in the dark jazz clubs of New Orleans as well as their favorite old-time fiddler’s conventions throughout the southern Appalachians.

Chris and Jess built the core of the Bumper Jacksons’ sound through these diverse and unassuming beginnings. It has matured quickly over these few short years and caught the interest of the rest of the Bumper Jacksons members. Dave Hadley (pedal steel), Alex Lacquement (upright bass, vocals), Dan Samuels (drum kit, suitcase) & Brian Priebe (trombone) masterfully amplify the diversity of tone, rhythm and power that defines the band’s core sound. The success of the band’s last two albums - Sweet Mama, Sweet Daddy Come In (2014) and Too Big World (2015) – demonstrate the ongoing refinement of their scrappy-yet-elegant, familiar-yet-reaching sound that explores a full spectrum of human emotion in its goal for the caramel core of Americana.

They’ve built a strong community of fans around their sound at home on the East Coast of the US and it was through this community’s support that the Bumper J’s have garnered the respect of regional arts foundations (2013-14 Washington Area Music Award winners, 2015-16 Strathmore Music Hall Artists in Residence, recipients of the Mid-Atlantic Arts Foundation Touring Grant) and are able to push out into new cities and communities across North America.

So whether it’s a packed house in a historic amphitheater or a fireside in the hills of western Maryland, the intimate ballads, growly blues, and fast paced two-steps will call you into another world that’s at once like home and the road. Their truly Americana sound that grabs at your soul and connects you with over 150 years of human passion. If you’ve got lips, they’ll smile… if you’ve got feet, they’ll dance… if you’ve got a heartbeat, it’ll quicken… all when you hear the sounds of the Bumper Jacksons!

"Bumper Jacksons strike like a band that’s leapt from a scratchy 78 and into an impromptu Mardi Gras jam. They’re all beads and beauty, this mighty uproar... Musically, Bumper Jacksons lead with early jazz, spiced with old country and contemporary approaches to lyrics ... they embody the essence and import of roots gathered, fostered and allowed to thrive anew.  Such vibrancy illustrates within their latest album, last year’s “Sweet Mama, Sweet Daddy, Come In" ... Pulled together as if by a rider who reins in a wild stallion, Bumper Jacksons’ music can quiet to a whisper. Unbridled, they can kick into a wail." - Tom Netherland, Bristol Courier, 2015

"Too Big World, is nicely varied, tasteful, energetic, well played and sung...you can't not like it... You may come for the jazz: clarinet and horns and swingy rhythms, plus Billie Holliday and Duke Ellington classics. But you'll stay for all the other ingredients in their mélange: fiddles and guitars, bouncy banjo-ukes, weepy country pedal steel, rock-and-roll electric guitar, jug-band kazoo and assorted percussion." - Stephen D. Winick - the Huffington Post, 2015

"Originals join traditional numbers on this joyous, diverse and beautifully performed 16-track collection. If you like groups such as Dan Hicks and His Hot Licks, Asleep at the Wheel and Squirrel Nut Zippers, you’d be wise to check out Bumper Jacksons." - Jeff Burger, No Depression, 2015

"While the dudes and dudettes from Dustbowl Revival injected a fair amount of rock and roll edginess into their latest live set, The Bumper Jacksons sing their Satchmo pretty close to the vest. From their Texas Swing of their java jivin’ ode to cafe noir called “Coffee Mama” to their funereal New Orleans send off “Hell Is Hot!,” this sextet from DC stay pretty true to the blues of Beale Street, the street parades of New Orleans and the swing of San Antone... Our recommendation: buy this one up, pick out your favorites, shuffle them together in a deck full of Louis Armstrong, B.B. King and Bob Willis and put on your dancin’ shoes." - Michael Verity, The Bluegrass Situation, 2015

"Their hellacious devil music will make you get up and dance!" - Stephen D. Winick, The Huffington Post, 2015

"Jess Eliot Myhre, the band's principal vocalist, never falters. If she won't make you forget Frank Proffitt, the ultimate source of most or all revival versions, she'll definitely leave a mark in your sense of the possible." - Jerome Clark, Rambles.net, 2015

"Bumper Jacksons evoke a bygone era of American music, integrating early jazz, bluegrass, blues, swing, and folk into a raucous, all-inclusive hybrid that sounds as loud and energetic as it had to have sounded decades and decades ago." - Pop Matters, 2015

"The band fuses jazz, blues, and country swing into a hootin', hollerin' party, full of brass, strings, and backwoods instruments like washboard and kazoo. Their New Orleans-by-way-of-Appalachia sound is stronger than ever on this record, stacking flirty ragtime; mountain ditties; and smoky, Southern soul into a rich revival soundtrack, perfect for a back-porch boogie on a hot June night." - Lydia Woolever, Baltimore Magazine, 2015

"If you miss the slightly punky 1930s-style hot jazz of the Squirrel Nut Zippers, then you owe it to yourself to check out the slightly countrified 1930s-style hot jazz of the Bumper Jacksons. This group’s sound draws deeply on driving pre-swing sounds but also on early string band music, Western swing and classic country... hot jazz, with Django-style rhythm guitar, group horn improvisations, and anachronistically chirpy female vocals (sometimes combined, weirdly and brilliantly, with steel guitar)." - CD Hotlist Pick of the Month, May 2014

"Jess Eliot Myhre sings with a depth of soul that harks back to the great jazz chanteuses of bygone glory. When she puts down the vocal mic and picks up her clarinet or iconic handbuilt frog washboard (which she plays wearing white gloves with thimbles sewn to the fingertips), her array of raw, natural talent is in full bloom. Guitar, pedal steel, bass, trombone, and a suitcase trap kit round out the flavors of the full band. Fans of the Squirrel Nut Zippers or Madeleine Peyroux will appreciate this fun-loving bunch of great young talents." - Shannon Holliday, SoundStage Hi-Fi, 2014

"This album feels like a time machine back to New Orleans at the turn of the century -- can't you feel the steam rising off these tracks?  The band pays due reverence to these songs but is by no means trapped in the past. They're having way too much fun to be bogged down in preservation -- that's the whole point of this music, after all. There's a contemporary, minimalist sensibility here -- all the good stuff is included and all the crap's been left on the cutting room floor." - Adobe and Teardrops, 2014

"A Bumper Jacksons show is an exciting blend of the traditional and non-traditional; contemporary lyricism and form is coupled with the early sounds of western swing, street jazz, bluegrass and country blues.  Their expansive roots repertoire and unique instrumentation will delight Americana enthusiasts of both traditional and progressive leanings... Trombones battle clarinets and kazoos. Playful, genre-exploding originals pepper their sets. The big-bearded Chris Ousley imbues a heavy dose of wacky energy and humor – his “mouth horn,” unpredictable falsetto interludes and originals like the “Bacon Adoration” keep the shows light, fresh and funny." - Spot on Magazine, 2015