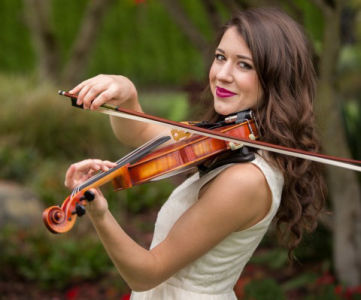 Promising to be a phenomenal show, powerhouse Celtic fiddle performer Kierah Raymond is celebrating the release of her 4th CD - Strong Bow, produced by Adrian Dolan. It is an outstanding collection of traditional and contemporary fiddle tunes where Kierah is accompanied by several musicians, including flute player Michael McGoldrick.

Kiérah is a multi award-winning violinist and Celtic fiddler from White Rock, BC. She has completed her A.R.C.T. with the Royal Conservatory of Music, receiving one of the highest marks ever given. With an Irish/Scottish heritage, Kiérah’s passion, however, is composing and performing traditional and contemporary Celtic fiddle music. A ridiculously talented player, Kiérah captivates her audiences by taking fiddling to a completely different level, demonstrating her mastery of the instrument and radiating her love of the music.

Kiérah has previously released three albums, each receiving Canadian Folk Music Award nominations with her 3rd - Stonemason’s Daughter - receiving a 2013 CFMA Award for Young Performer of the Year. She has also written B.C.’s first book of all original fiddle tunes, Kiérah's Collection, carried by Long and McQuade across Canada.

"Stonemason's Daughter cannot be described as ethereal and sweet: it’s a masterful presentation of how Kiérah commands the fiddle with definition and precision. A powerful listen". - Eileen McCabe, Irish Music Magazine

"A classically infused Irish/Scots melange of excitement and reserve. "Stonemason's Daughter" is a work of finely wrought conviction and musical pedigree".- John O'Regan, The Living Tradition

"Growing up the youngest of 7 children, Kiérah must have felt the real need to stand out, and stand out she does with her new album. It's not just her technical prowess as a traditional fiddler that makes "Stonemason's Daughter" note-worthy, it's her touch with the old tunes and her taste for composing new ones". - Devon Leger, Hearth Music

“A factor in Kiérah’s early rise to musical prominence is her sound recognition of the importance of understanding the music, the period it was written in, and discovering the emotions and truth behind the music” – Carol Watson, Fiddler Magazine

“Kierah has accomplished more at 18 than most of us could conceive in a lifetime. A phenomenal fiddle player”! – Steve Edge , Rogue Folk Club