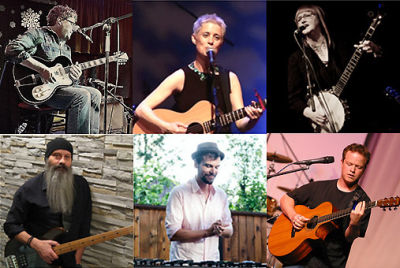 Starman: An Acoustic Evening of Bowie Songs (BC)

When Doug Cox first conceptualized Starman: An Acoustic Evening of David Bowie Songs, the thought of it being a posthumous tribute to the influential English rock star was inconceivable.“Absolutely, it was a shock,” said Cox, when discussing the news of Bowie’s death.  “But it’s not going to change much of the production, other than what we say."

Cox is careful not to call the show a tribute, to avoid giving fans the impression “this is people doing a soundalike version of somebody’s show,” he said. Starman will be presented as a songwriters-in-the-round format, with lead vocals split evenly among band members. Cox has recruited a solid cast of professional musicians, including Juno Award-winning producer, performer and sideman Steve Dawson and Juno Award-winning singer/songwriter Helen Austin. Other band members include Cox’s long-time collaborator Sam Hurrie, Linda McRae (Spirit of the West), percussionist Robin Layne (Locarno) and Canadian bassist extraordinaire Rick May. Members of the all-star band chose Bowie songs that were meaningful to them, and the results cover his entire career — up to and including a song from his last album, Blackstar, which was released January 2016.

The musicality of each band member plays a big part in the performance, Cox said. McRae, for example, will play accordion, guitar and banjo, while Austin will play guitar, piano, glockenspiel and melodion. Cox, a Juno Award nominee in 2010, is a veteran sideman who has backed up plenty of songwriters during his career, so he’s prepared for anything. That said, Starman presents the performers involved — “each one who has their own bag of tricks,” Cox said — with a unique opportunity.

Join an inspired, diverse group of Canadian singers/musicians as they celebrate the songs of Bowie in this in-the-round concert performance. More info at www.acousticstarman.com