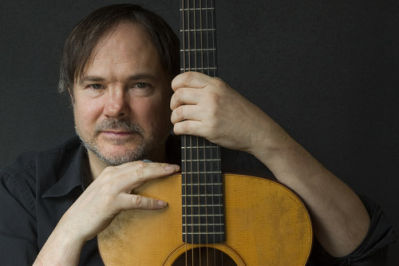 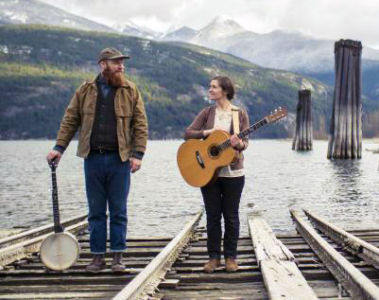 Guitarist and singer Andy Hillhouse had his entrance to the world of professional folk music began with the creation of his own group Mad Pudding, who released four CDs in the late 1990s and performed widely across 2 continents. Now as a song interpreter and specialist on Celtic rhythm guitar, he has played with several of Canada’s most respected, unique and exciting acoustic musicians including Pierre Schryer, Zav RT, and The McDades, with whom he won a Juno award in 2006. Andy is a former member of the Juno nominated vocal ensemble, Musica Intima. Andy has PhD in ethnomusicology from the University of Toronto, with specialization focused on the music of the late Canadian fiddler/composer Oliver Schroer.

He is at long last releasing his first solo CD. Joining him is fiddler Cam Wilson (Mad Pudding, Joe Trio, Van Django), multi-instrumentalist Jeremiah McDade (The McDades, Maria Dunn), and boundary-spanning bassist and composer Adam Hill, as well as some other special guests!

Andy conceived of doing a solo album after moving out to rural Harrison Hot Springs 3 years ago, following a 6 year stint in Toronto, where he pursued his PhD in ethnomusicology. Feeling a little isolated from his broader Canadian musical community out in Harrison, Andy realized it might be fruitful to start working on his writing, arranging, and guitar picking in solitude, and to use the wonders of digital technology to reach and collaborate with musicians he admires and loves. Andy's new release is a dichotomy - while it is rooted in solitude it is all about community: a celebration of relationships, whether proximate or dispersed over space.

Andy is a west-coaster - as such it is his instinct to search far afield for musical styles from other places, balancing an interest in continuities of tradition with the desire for self expression. Further, he has always lovingly embraced his upbringing in pop and rock as well, and has a background in classical music. The CD is a melange of these and other influences expressed in his own songs and tunes, traditional songs, and interpretations of other writers' songs. The uniting feature is his voice and acoustic guitar work, a combination of finger picking and "celtic backup" style rhythm guitar that is strongly influenced by his favourite players, ranging from Richard Thompson to Bruce Cockburn and Daithi Sproule. Thus, whether it is his own song Canning Line, which recounts the canneries that once lined the BC coast, the lush Irish ballad Banks of a River Near Blackwatertown, the Brazilian Baiao rhythm of his composition Boipeba, or the poignant Warren Zevon song Mutineer, Andy's guitar work, in concert with the fabulous upright bass playing of Joe Phillips, creates a thread through a shifting array of sounds and textures, including fiddle, saxophone, pandeiro, and piano.

Underlying these sounds is a theme of community across distance, and the connections between far flung places, and past and present. In keeping with this, the cover art displays an artistic rendering of the bark of the Scotch Pine, a tree that emigrated from the old world to the new.

It has been said that all Canadian writing inevitably reflects the almost impenetrable vastness of the land and the great distances that separate us. If The Road We Once Knew by the Eisenhauers, the husband and wife duo of Jeremy Eisenhauer and Sheree Plett Eisenhauer, is any indication, you’d be hard pressed not to come to the same conclusion about Canadian music. Simple, spare and heartbreaking in its directness, the concepts of distance, time and the wavering arcs of separation and reunion have rarely been as compellingly explored as they are in this powerful debut album.

The Road We Once Knew is, at heart, a meditation on change that explores the dynamics of escaping from the city and moving to the country. In the Eisenhauers’ case, the move involved swapping life in metropolitan Vancouver for the relative seclusion of Kaslo, an old lumber town tucked deep in Eastern British Columbia’s Purcell Wilderness Conservatory. The decision to pull up stakes was motivated by the need to find a place with enough peace and quiet to care for Sheree’s mother, who was suffering from a terminal illness.  When she passed away not long after they arrived in Kaslo, they suddenly felt cut off and quite alone, with only the ‘trees, lakes, and world around them as friends.’  When Sheree plaintively cries ‘there’s a wilderness inside of me’, on the album’s final cut, it is obvious that she knows of what she sings.  Isolation brought unexpected rewards, however, as their seclusion allowed the pair to go inward and reflect, before eventually surfacing and writing music together.  This was something that they had been unable to do while they lived in the city with all of its competition and distractions.  After twelve years of living and making music together and recording eight solo albums between them as ‘Eisenhauer’ and ‘Sheree Plett’, The Road We Once Knew is their first release under their shared family name.

Realizing the significance of their decision to work together, Jeremy and Sheree wanted to ensure that their new songs got the treatment they deserved, so they bit the bullet, fundraised a handful of cash, and flew to Nashville to meet Steve Dawson and record at his legendary Henhouse Studio. The attractions of travelling to the country music capital to work with one of North America’s most renowned roots music craftsmen were obvious, but more than that, the journey offered the Eisenhauers the opportunity to focus on their music and songwriting fully, ‘without the beautiful and messy chaos’ of their busy lives to distract them.  With kids and a pile of projects awaiting them upon their return to Kaslo, they made the best of their time in Nashville and got down to work right away to record 15 songs in 5 days, with 14 of them making it onto the album.

With its songs of loss, faith and the gratitude of renewal, The Road We Once Knew is the perfect soundtrack for real people trying to live authentic lives.  Beautifully played, sung and executed, it is a testament to the healing power of music and the value of wisdom gained from experience.  It's true soul music. Every word and note on it rings true.