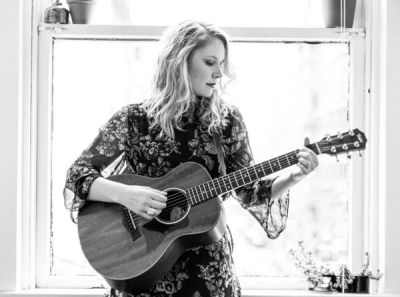 Lydia and Ida met in 2016 in Austin Texas, as part of the House of Songs Songwriting Summit. They lived together for two weeks co-writing songs with a group of musicians from Canada, the US, and Europe.  A Danish born musician, Ida comes from a tiny village of 300, called Traeden. This year she founded the Traeden Winter Festival, held in the village's 800 year old church. Lydia was invited to travel to Denmark to play at the festival, and was honoured to be the only non-Danish performer in attendance.  Join us for some traditional Danish 'hygge' at The Rogue Folk Club, Ida's first concert (and visit!) to Canada. These two woman's songs will bewitch you with their beauty. And their friendship formed through music will shine clear through their joined performances.

Lydia Hol's music leaves you with the taste of salt on your lips, and the feeling of the wind in your hair. Since the release of her debut EP, Boats, in 2012, Lydia Hol has toured the country from coast to coast, filling rooms with her songs and stories. Lydia’s time spent living in Ireland flavors her performances with a storyteller’s honesty and charm, and her studies in English Literature has helped to shape her songwriting into an insightful, and mature art. Sharing the stage with folk legends such as Sylvia Tyson, Dar Williams, and Shari Ulrich as she did this past year, has further encouraged Hol’s place as one of Canada’s most dynamic young artists.

In 2013 Lydia was a Top 20 Finalist in the Peak Performance Project, and a Regional Finalist in CBC’s Searchlight Contest. In 2014 she showcased in Toronto and Kansas City, was the Featured Musician at The Vancouver Mayor’s Arts Awards, and curated the Acoustic Guitar Project.

The writing and recording of ‘Heading North’ was the focus of 2015, recorded at Afterlife Studios in Vancouver. But whereas ‘Boats’ was very much a solitary, stationary effort – that of a young artist writing in her quaint cabin on the Pacific coast – Heading North is a more communal collection. The arrangements on this record are more lush and elaborate than those on its predecessor, thanks in large part to a top-tier cast of supporting players. The list is a long one, featuring the likes of Jesse Zubot (violin), Paul Rigby (guitar, steel), and John Raham (drums/engineering) Many of the musicians are on loan from Be Good Tanyas frontwoman Frazey Ford, and helped bring that welcome collective spirit to the album.

At their core these are Hol’s songs, and embody her essence as a musician and lyricist. On both fronts, the album captures the essence of femininity through a delicate, elegant take on folk – simultaneously subtle and sultry; sometimes vulnerable, other times tenacious. Her voice and guitar anchor a host of tasteful instrumentation that evokes a range of tones from country to classical and beyond.

“The north is really the last frontier, the last unknown,” Hol muses, speaking to the themes of exploration and risk-taking threaded through these nine songs. The title track is about “throwing the tethers off and finding strength,” about moving forward into something bigger than oneself. Hol is a life long student of literature and skilled wordsmith; some of the stories shared on Heading North are her own; others are borrowed. “Mistress of the Track,” tells the tragic story of Canadian jockey Ron Turcotte, and “Loneliest Word” is based on a Wordsworth poem

Lydia’s communal spirit reaches beyond her own music, and into the broader music world as well. She is passionate about promoting songwriting and community, participating in the House of Songs project.

"Hol crafts her lyrics cleverly and with care, adding little twists to a song’s construction and splashes of colour and mood.” - Penguin Eggs

Amongst a digital mountain range littered with accomplished folk-ish bands and singer-songwriters, it is a rare miracle to come across a cave so rich in jewels as the one beneath Ida Wenøe’s ribcage. Clash Magazine‘s description of her sound as being “bewitching acid folk with a deeply personal edge” and Paul Lester’s comments in The Guardian that she “sounds like the young narrator of her own magical-malevolent fantasies” perhaps begin to delineate her skills.

While she has an obvious appreciation of Americana, her sound is very definitely laced with more English undertones: the kind of sound Edward Woodward might have heard downstairs in the local inn had the Wicker Man been filmed in a remote Danish village, while Sarah Lund scoured for clues in her jumper. Like the best of the Nordic Noir leaving the Danish mainland, the recordings are at once both sonically pure and grimy and there is an honesty to the songwriting that tugs at your sleeve. While her grasp of English is second nature, there’s some of those intriguing turns of phrase that only a heart that dreams in another language can weave: “The deep conceals things that are real/ look beyond the mirror/look beyond the mirror”, “I know we see things differently/as long as it’s not separately” and “You’re a fish in a bottle/a cock in a coop/the essence of trying…”

While still fronting the much-feted Boho Dancer Ida enjoyed a series of sold out supports in Denmark with Teitur, and a spate of tremendously well received shows both in London and at The Great Escape in Brighton.

Sure, she has the usual credible influences from Joni Mitchell and Neil Young to Danish folk hero Sebastian; and there’s hints of Sandy Denny and Linda Perhacs. But to list artists she sounds like would be to miss the point entirely. As anyone who has witnessed a live show can attest, Ida Wenøe is very definitely Ida Wenøe.

"… a childlike fragility that makes the songs sound like whimsical folk for fairy tales with a sinister undertow. Her voice – weary but cute, with the power to cut through – is perfect; she sounds like the young narrator of her own magical-malevolent fantasies…” The Guardian

”It’s been a long time since I’ve heard an artist perfectly capture the distinctive sound of late ’80s/early ’90s folk-pop—that kind of glassy glaze that cuts right to your core—but Danish singer/songwriter Ida Wenøe has done just that with her emotionally-charged and uplifting new album Time Of Ghosts.” - Robert Ham, Nordic Spotlight