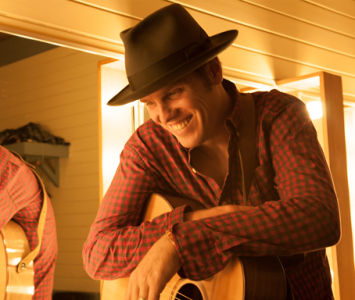 “Gunning is the next big thing in the True North of Song, an artist as compelling, as assured and attentive to every nuance of the writing process, as Lightfoot, Cockburn and Stan Rogers before him.”- Toronto Star

Call it the silver lining in the cloud of a brutally cold Nova Scotia winter. When acclaimed folk singer/songwriter Dave Gunning decided it was time to make his 11th solo album, he found the bleak weather outside a blessing, not a curse. “We were literally snowed in, but the power was on and I was good to go,” he says of the making of that album, Lift.

In his well-appointed home studio in Pictou County, NS, Gunning went to work. The follow-up to 2012 album No More Pennies, Lift came together “very quickly and organically,” he explains. “I wanted to maintain an honest acoustic sound to reflect my live shows. I did what I could on my own then I brought in some guests to spread out the gene pool, so there was enough to keep the listeners interested.”

The record’s sparse and acoustic template proves to be the perfect vehicle for Dave’s neatly-crafted and poetic material and gently expressive vocals. There are no drums on the record, and Gunning handles much of the playing himself, contributing fluent acoustic guitar, upright bass (“the same one I used touring in Stompin’ Tom Connors’ band,” he notes with pride), highstring guitar, and banjo. Talented pals JP Cormier, Thom Swift, Jamie Robinson, Darren McMullen and Asa Brosius take effective cameos on different tracks.

Lift is actually Gunning’s first self-produced album. That’s a surprise, given that he has worked as a co-producer, recording engineer and mixer on albums by such top East Coast artists as Bruce and Dylan Guthro, JP Cormier, Steven Bowers, Buddy MacDonald, and Còig (who recently won an East Coast Music Award and Canadian Folk Award for their 2014 album Five, co-produced by Gunning). “I usually record and engineer my own albums but would get someone else to produce,” Dave explains. “For Lift, I put my big boy pants on and did it myself!” Those pants fit just fine here.

Eleven albums in, Dave Gunning has become a truly masterful songwriter, one who has earned real peer respect from such Canadian folk songwriting legends as Ron Hynes, David Francey, and James Keelaghan. “I grew up listening to people like Ron Hynes,” says Dave. “I look up to them but then it hits me sometimes that I’m their peer and they like my stuff too. It’s a weird headspace, flipping from being a fan to being a peer.”

Co-writing with his peers has had a major impact on Gunning. “The co-writing process has really helped my career, as it helps you keep the energy momentum going,” he explains. “Noted co-writers on Lift include Matt Andersen, Thom Swift, Catherine MacLellan, Jamie Robinson, plus American Sally Spring and Dave’s Pictou pals, Jim Dorie, John Meir, and Ray Stewart.

Unlike the assembly-line approach of Nashville writing sessions, there’s a spontaneous and relaxed approach to writing with Gunning that is reflected in the warmth of the material.  Though many of his songs remain rooted in the province Dave is proud to call home, they have proved they can travel well. A genuinely engaging performer and storyteller, he is now a fixture on the folk festival and club circuit in the rest of Canada and United States.

Gunning’s recording career is now approaching a full two decades in length (his debut album, Lost Tracks, came out in 1996). Along with richly-deserved peer respect, he has also earned a shelf full of music industry awards. That tally now stands at eight East Coast Music Awards and two Canadian Folk Music Awards, plus a 2012 Juno Award nomination in the Roots & Traditional Solo Album of the Year category for his album …a tribute to John Allan Cameron, a compelling homage to another of Dave’s Maritime musical heroes.

Give yourself a Lift and check out the work of an authentic artist at his creative peak.