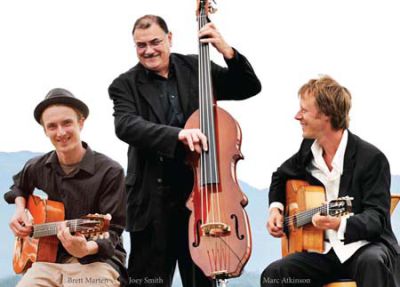 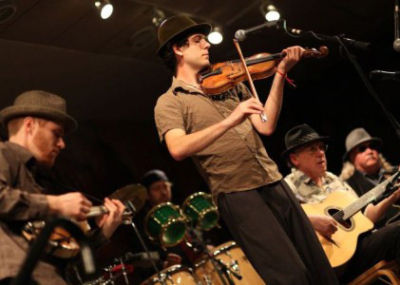 Ranger and The Re-Arrangers (USA)

Marc Atkinson is one of Canada's finest Juno-nominated, Western Canadian award-winning musicians. He is the leader and composer of the internationally renowned Marc Atkinson Trio (and co-founder, composer and performer in the acclaimed The Bills). The music of this virtuosic group is melodically captivating, sensually charged and ferociously, technically awe-inspiring.

The Trio, formed in 2000, has toured North America, England and Europe and has received standing ovations everywhere they perform from the Montreal Jazz Festival to the Vancouver International Folk Festival to DjangoFest Northwest.

The many original Marc Atkinson compositions are jewels in Canadian guitar repertoire. The compositions glide seamlessly from unusual beauty, to raucous rhythm. If you are a lover of the guitar, instrumental music or just music, you will love this group! Marc is a multi-instrumentalist/composer/arranger/producer, and is one of Canada's most talented musicians. His catchy compositions, found on the self-titled CDs I, II, III & IV take guitar beyond the usual repertoire and sound. The tunes have a fiery but elegant guitar style, infused with a catchy blend of influences. All this while still maintaining the laidback humour and casual 'good time feel' of Canada's West Coast.

Atkinson's picking has been described as flawless, surprise-filled, sizzling and supremely melodic. His music is original, complex and challenging in its conception and delivery but remains accessible and absorbing. The music of the Marc Atkinson Trio good-naturedly welcomes all listeners aboard for an intriguing, exhilarating and unforgettable ride.

Like many virtuosos, Ranger picked up the violin when he was six-years-old. After hearing a CD of violin jazz, he started digging deeper and listening to the greats: Stuff Smith, Joe Venuti, and Stephane Grappelli. That led him down the road to Django Reinhardt and the world of gypsy jazz.

What’s incredible about Ranger and the Re-Arrangers is that the most “modern” take on the gypsy jazz genre is the addition of percussion to the band’s sound. It’s not like Ranger goes all Ornette Coleman on the genre or anything – he just plays it like the old kings of swing jazz did. Still, the addition of a drum is a point of contention for gypsy jazz purists. But Ranger doesn’t want to give the band a sub-genre. You can say ‘string jazz featuring violin’ or something, but then you’re just dancing around it and using more words to less clearly describe it,” he said. “If someone feels a need to differentiate, I would say start with gypsy jazz and add ‘but with some percussion,’ or something.”

Ranger and the boys have played all kinds of shows in the Seattle area – festivals, museums, parks, jazz clubs, bars, restaurants, county fairs, weddings – and they have more dates coming up this year. Their last album, Django’s Tiger, came out last year and is available along with their debut, Gypsy Moon.

Sure, Ranger and the Re-Arrangers are weird, but it’s an impressive, comforting kind of weird. Impressive because not many people can play a fiddle so well, and comforting because it’s nice to know that there’s a community of musicians keeping an old, storied genre alive.

BC's newest hot club quartet play hot swing in the old style à la Django Reinhardt. On a mission to capture the sound of Django's swing bands of the 30's and 40's, the Jewels swing hard and fast, with energy and lots of feeling. This all string band presents a full, clear and undistorted wooden sound rarely heard in the Jazz Manouche scene today.

Cam Boyce (violin) is the BEST fiddle player for at least 1000 km in ANY direction, and probably somewhat farther.

Aaron Loewen (guitar) is the kingpin of the Okanogan Django scene, expert at pairing wine and swing.

Lukáš Hyrman (guitar) became permenently smitten with Django's music after seeing first hand how it makes strangers fall in love. He hasn't been doing anything else since.

Juan Pablo Gonzalez (bass) was classically trained in Venezuela. Now he studies Roma music intensively with the great Lache Cercel, holding it all down on contrabass.