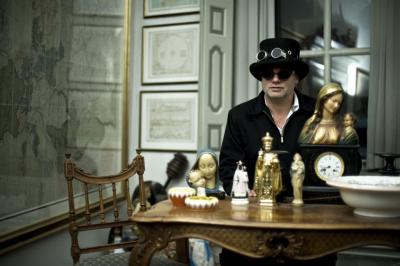 Eaglesmith, a prolific songwriter and recording artist who can make audiences think and laugh, is on the endless highway with 6 Volts, a plain, simple and powerful CD (his 19th) that salutes his roots and the music he grew up with. - San Antonio Express

Acclaimed singer, songwriter and bandleader Fred Eaglesmith returns with a new CD, 6 Volts, and his new band, which also features former Vancouverite Mike Zinger on mandolin. It's the natural result of following the cue of his musical career and now nineteen albums, with the January 2012 release of 6 Volts. The result is one of the most fascinating and musically rewarding careers in contemporary music.

As he has doggedly gone his own way as an independent musical artist, Eaglesmith has also enjoyed such high profile rewards in recent years as having his songs covered by country superstars Toby Keith, Alan Jackson and Miranda Lambert, among many other accomplishments.

6 Volts is yet another landmark on a journey. The album takes its title from the battery that powered the game-changing transistor radio - introduced in 1954, the same year that rock'n'roll emerged into popular consciousness - and embodies the notion of back to the future. Captured live in the studio with one microphone onto a one-track reel to reel recorder like so many enduring classics, 6 Volts also bristles with contemporary urgency.

By bringing the recording process all the way back home to its technologically basic origins, Eaglesmith succeeds in creating authentic and meaningful music. There's still a certain love to it that's better than multitracking, he observes. Music doesn't get any more real than when you can't overdub, autotune, or fix it in the mix.

One of nine children raised on a farm in Ontario, Eaglesmith remains genuinely tied to the land and the lives, labors, trials, tribulations and triumphs of everyday people that have consistently given his work its enduring emotional resonance. After his family lost its farm, he set out on his own at age 15, hitchhiking and hopping trains across North America and honing his craft as a writer, singer and musical entertainer in hobo camps and for crews of fellow forest firefighters before working his way upward in small clubs and coffeehouses.

These days Eaglesmith is in motion most of the year from show to show in a school bus and RV that have been converted to run on both gas and used cooking oil they get from restaurants and diners along the way. The troupe pulls into campgrounds, RV parks, truckstops and WalMart parking lots to spend the night rather than in hotels, and cooks up their own feasts in the morning for breakfast. Times are hard and things are tough for people, and we shouldn't be riding in busses that look like bachelor apartments, he states. As a result, It makes me sound like the truth when I'm up there singing because it is the truth.